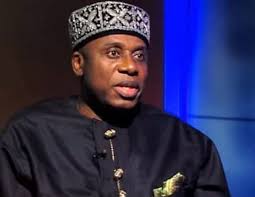 2. Do you know that he is a linguist having studied English at University of Port Hacourt?

3. Do you know that Amaechi’s political career started when he was a student of the University of Port Hacourt? He was the President of the National Association Rivers State Students in the University?

4. Do you know that at 25years in 1990 he was the Secretary of NRC in Ikwerre LGA of Rivers State?

7. The Obasanjo administration tried to stop him from being the Rivers State Governor after winning the primaries. OBJ masterminded his indictment by the Nasir El-Rufai led administrative panel of enquiry in 2007.

8. Our brave warrior challenged that decision in the law Court and sustained the fight until the Supreme Court of Nigeria in a landmark Judgement in 2007 ruled in his favour and returned him the duly elected Governor of Rivers State at the age of 42! He came back from exile in Ghana and came from there to be sworn-in as Governor of Rivers State.

9. Amaechi’s cousin, Celestine Omehia was selected as his replacement in that botched attempt and was erroneously sworn-in as the Governor for five months until the Supreme Court judgement removed and gave the mandate to Ameachi the lawful owner.

10. Amaechi’s first term was backdated to start on 29th May, 2007 because according to the Supreme Court ruling, having been duly nominated by his party PDP, it was deemed that he was the candidate on the ballot despite having Omehia who was just a beneficiary of an illegal act. So part of Amaechi’s four years was spent by Omehia and by law Omehia is not supposed to be addressed as former Governor of Rivers State.

11. Amaechi as a sitting Governor and Chairman of Nigeria Governors Forum has a long battle with President Jonathan because of conflict of interest with the then First Lady, Patience Jonathan, who is a native of Okrika LGA in Rivers State. The president launched an unprecedented political attacks on Amaechi including using the Police to intimidate and harass him as a sitting Governor, but Amaechi prevailed.

12. The present Governor of Rivers State, Wike was Amaechi’s Chief of Staff in his first term. He was nominated by Amaechi to represent Rivers in the Federal Executive Council and was assigned the portfolio of Minister of state for Education but later betrayed Amaechi, and switched his allegiance to President Jonathan.

13. Amaechi alongside his counterparts in nPDP Wamakko, Kwankwaso, Nyako, Abdulfatah Ahmed, Bukola Saraki, decamped to APC which gave the new party the arsenal to fight Goodluck Jonathan led ruling PDP to victory in 2015.

14. As Governor of Rivers State, Amaechi had to personally drive himself from Kano to Abuja to escape ambush and assassination attempt by the then ruling government in 2013/14.

15. Amaechi was later appointed the Director General of the Buhari Presidential Campaign in 2015 and 2019. On both occasions ,he delivered Buhari to victory.

16. Ameachi is currently revolutionalizing the transportation sector as a Minister. Mr Railways, as he is now fondly called, has overseen the massive overhaul of the railway sector with the completion and commissioning of Abuja to Kaduna rail line, Warri to Ajaokuta, standardization of Lagos – Ibadan rail line to mention but a few.

17. Under Amaechi’s watch as the Transport Minister, the Baro River Port was finalized, the bay and harbour were built and the facility commissioned.

19. The Maritime Academy of Nigeria Oron Akwa Ibom State was upgraded and expanded to international Standard.

20. CRA is the longest serving Minister of Transportation in Nigeria. In his 7th year, no previous minister has equalled that record in the same Ministry.

21. Rotimi Amaechi is a devoted family man, married to one wife and three children and has never been involved in any controversy in his relationship and personal life.

CRA, the disciplined and performing President Nigeria deserves in 2023.