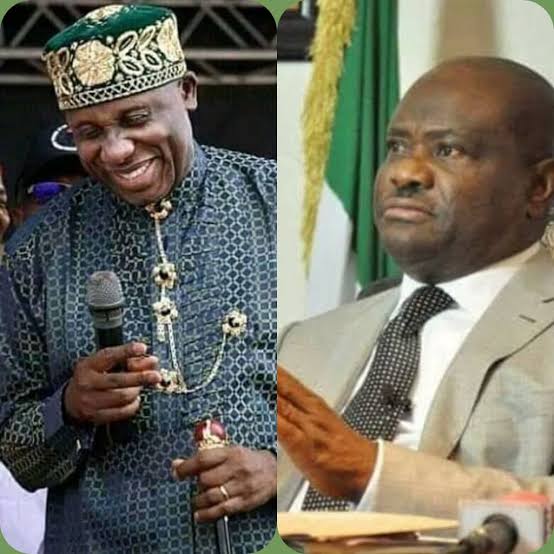 …Describes the event as laughable, deceitful

….. Says most of the paraded characters are on Sabbatical to collect surviving funds from PDP’s Father Xmas

The recent defection of alleged members of the Rivers State chapter of the All Progressives Congress to the People’s Democratic Party, has elicited a floodgate of reactions from political analysts and stakeholders within the folds of the two major parties in Rivers State.

Reacting to what he termed a noisy carouse, chieftain of the APC and erstwhile National Publicity Secretary of the defunct New People’s Democratic Party (nPDP), Chief Eze Chukwuemeka Eze, said phantom receptions and luxurious jamborees are part of the careless schemes of Gov. Wike and his band of masquerading swindlers to defraud the state, reform individual pockets and coop the people in perpetual poverty.

In a statement made available to media houses in Port Harcourt, the party Chief described the event as a gaudy showbiz organized to offer Gov. Wike another avenue to harness his potentials in clownish antics while swindling billions from public coffers.

According to Chief Eze, the bogus claims by the PDP that bigwigs from the All Progressives Congress were part of the returnees, is deceptive, as the boastful assertion is a fanciful cosmetic applied to get the facade of true defection in a cheap sham.

He said Rivers people and Nigerians were treated to a hypocritical reception organized to receive alleged defectors from the APC, whereas the essence was to attract undue relevance and justify the fanfare of squander mania ravaging public administration in Rivers State.

See also  Prominent South-South Leader, His Highness Arabs Sara- Igbe, Lashed Out At Wike, Accusing Him Of Hatred For The People Of Kalabari Ethnic Nationality And Ijaw Nation At Large.

Most of the characters mentioned on the script and who claim to be members of APC had no business in the progressives party, although they had at various occasions benefitted from the benevolence of Rt. Hon. Chibuike Amaechi, erstwhile Governor of Rivers state and incumbent Minister of Transportation.

For instance, former Deputy Speaker of the House of Representatives, Chibudom Nwuche, who was also paraded as having left the APC for the opposition party, had never participated in the business of the All Progressives Congress since the inception of the party in Rivers State. His name is unheard of as a progressive even in his very unit.

Debunking claims that all named defectors are of the APC, Eze said only Hon. Chief Ogbonna Nwuke and to some extent Sir Chief NGO Martins-Yellowe, were in the Rivers progressives family though Sir Yellowe was of Senator Magnus Abe’s none functional faction.

Even my good friends, Alabo Charles Dokubo and Hon Daemi Apkana from Akuku Toru are PDP members since 1999 till date and can never present any document indicating that they were ever members of APC while Hon Briggs Kurotamonoye who was an SA on Agriculture to Amaechi when he holds sway as the Governor of Rivers State stayed back with Governor Wike when we brought APC to Rivers State and for such characters to be presented as defecting from APC to PDP in public gathering simply shows how frustrated, depraved Governor Wike and his drowning PDP can demonstrate their desperation and shamelessness to the world.

He said all the other decampees have very little or no electoral avenue to warrant the funds allegedly spent to welcome them to a party whose very foundation in Rivers State is shaking, as some key stakeholders are billed to decamp to the APC soonest.

If the PDP and Gov. Wike could be deceived to the extent of according such a luxurious reception for men of very little or no electoral worth as named above, Eze feared that the State Government may need to borrow to organize a befitting reception for Senator Magnus Abe and his gullible followers who would definitely join the PDP formally after the fresh onslaught against the APC meets its Waterloo.

Chief Eze expressed confidence that with the calibre of leaders in Rivers APC and coupled with the quality of people expected to defect to the party in December 2021, APC in Rivers State is sure to be one of the strongest State Chapters in Nigeria with the very competence to unsettle both Wike and his PDP come 2023.

The persons who are assumed to have left should not be taken seriously, as they journeyed to get some wads of dollars from Gov. Wike, the African POS and Nigeria’s Father Christmas, who has very little or no idea of what to make of the state’s resources.

Eze therefore pleads with party faithful to pray for these so called defectors as most of them didn’t defect with clear eyes as they have confessed that they joined Governor Wike bandwagon not that they don’t know how he has messed up governance in Rivers State but for them to survive the hunger peppering them and their families and that they will be back once they are settled by the PDP Father Xmas besides the money he is sharing is Rivers State funds and they are entitled to have their own share.