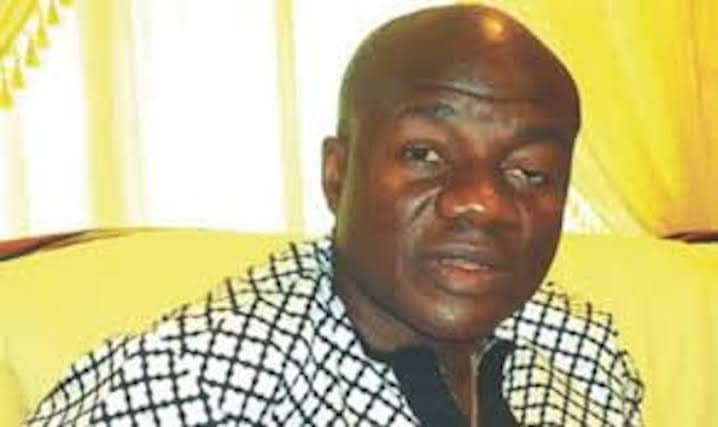 I read the hogwash from a demented kwashiorkor~stricken urchin at sixty.

I was to ignore because I am very much aware of his nefarious intentions, namely, inspire me to espouse certain truisms as confidential as they are and taint my highly priced image as one who is incapable of keeping secrets.
But I am persuaded by superior reasoning to deal with his usual jejunes, once and for all.

To effectuate this, I beg to jettison my style of respect for good etiquette, borne out of my cultured upbringing and intellectual discipline. My apologies in advance to those who may feel disappointed that I condescended so low, to the gutter reputation of Eze Chukwuemeka.

I shall take the issues as contained in the limbs that his tripes were couched.

1) The marabout (Ezedibia) purports to be replying to the text messages I shared with him inbox. I will not waste my precious time to put out his nonsensical text messages that elicited my terse responses to him. However, I own up as author of those lines and take full responsibility for the aftermaths such as this.

Chukwuemeka Eze in his response to me stated ” Chief Tony Okocha, it is sad by your text above that your mental condition is worsening…”.
The goon in these lines, succeeded in revealing his stupidity as all sane minds reading my messages to him, will know from the construction and intended essence, that the author is sound and proper.
Above all, Chukwuemeka Eze recognises and properly addressed me as a Chief and I thank him.
I don’t know any Dr Green who is a psychiatrist. I have a cousin Dr Kinikanwo Green, who is a consultant Gynaecologist in the employ of the University of Port Harcourt Teaching Hospital and Chief Medical Director, Greencare Hospitals.
Chukwuemeka Eze should tell his gullible readers, the Dr Green that he is referring to.

The Ezedibia knows too well, Dr Sampson Parker, (a Psychiatrist,), former Commissioner Of Health, Rivers State, 2007~2015. and who his patient was.

I am Sure he knows Dr Bonas Hart and his specialty in Medicine and who his patient is.
In any case, RIvers People know the aforenamed patient.

Eze noted “… Amaechi under reference was the one that once picked you from the gutter, cleaned and made u the Chief of Staff to the DETRIMENT of better qualified RIvers Sons with the hope that your health challenge will improve….” (see how unintelligible the long lines without comas, full~stop, etc an error in English called enjabment).
What do you mean by “…DETRIMENT of better qualified RIvers Sons…”?.

Anyway, outside these grammatical errors and malapropisms and gaffes, have you not succeeded in revealing that Amaechi has mental challenge for which reason, he picked up his colleague from the gutter and appointed him into the exalted office of the Chief of Staff?.
How would a sane Chief Executive, appoint a mentally challenged person, to superintend his Political desk?.
Just how?.

Eze continuing, foolishly forayed into a voyage that he is completely a stranger to, namely: how Amaechi was defeated by Barr Uche Okwukwu in the poll after securing the highest lawful votes cast for House of Assembly, Ikwerre Constituency only to be aided to purchase the judgement on technical ground, at the Court of Appeal by Dr Peter Odili, his benefactor that he turned around to dock and almost imprisoned when he became Governor in 2007. Thanks to Mr Chibike Ikenga, Chidi Wihioka, Chairman Nyesom Wike, Chukwuma Akani, (who photocopied All the Appeal documents in his office), et al.
Was not after the abracadabra at the Court of Appeal that Amaechi got into the Rivers State House of Assembly and later elected Speaker of the House?.

Eze in his stupidity, reminded readers that Amaechi was in exile to Ghana and never was around to pursue the law suit he was added by Gov Odili, to institute against the EFCC, who indicted him of corruption.
Thanks to Nyesom Wike again, who was the armour~bearer and General, in the fight for Amaechi’s unmerited victory in the Supreme Court. Yes, unmerited because, days after the Apex Court delivered Judgement on Amaechi vs INEC & ors, it turned around to obliterate the grounds never to be cited going forward.

Eze must know that Tony C Okocha as Pioneer Secretary~General, was a major player in the dramatic scenes.

Who is more an ingrate between a homeless Eze Chukwuemeka, who I accommodated and fed and approved allowance in Government House, for three years, while I was Chief of staff, Government House. Will Eze deny that fact?.
Has he dedicated his usual Hogwash, to thank me for providing him succour for three whole years?.
Did he merit the benevolence?.
Is he a Rivers indigene?

Was Eze suggesting that by Amaechi docking his life~wire and benefactor, Dr Peter Odili, before the Kayode Eso’s Truth and Reconciliation Commission, a body set up by Amaechi as Governor, is gratitude to Dr Peter Odili?.

On the issue of Amaechi’s travails especially as mentioned here, the NIGERIA Governors Forum Election, does he need to be reminded that Chief Tony C Okocha Ksc, was Chief of Staff Government House, at the time in issue.
Could the serving Chief of Staff, who meticulously watched the back of his then boss, was involved in the ignoble and shameful drama watched in the declaration of the Election result.?.
Blatant and factless liar seeking approval yet getting none.

What else should I respond to Pls?.

Now to Chukwuemeka Eze. He is obviously not from Rivers State.
He has no polling unit where he votes in RIVERS.
Despite of the fact that Eze lived freely in Govt House, Rivers, he was too afraid to contribute even a line in passing, to the magazine that I solely sponsored with Chief Obiaruko Ndukwe as the Chief Editor. “Change Agent” was the name of the weekly sometimes, bi~weekly magazine which was used to launder the image of Amaechi and show him off as a dependable ally.
I pray that Amazon Popularly called Oby is reading.

Eze has a sordid history. He took his father to early grave as a result of having SEX with his Father’s wife.
Can he tell his readers and fans and ilks, why he was cursed by his father and was denied access to his father’s remains before burial.?.
I have a dossier of his abominable deed for which he can’t go to his village. I dare you Eze. Go to your father’s compound in the village.
I double dare you, take a libel or defamation of character suit against me.

Where do you live, Mr former Publicity Secretary of a One time pressure group in PDP, nPdP?.
What other office have you occupied?.
Are you a journalist or a freelancer? , Pls what is the name of your outfit?.
We know and have read The Beam. Telegraph. Verite, etc..
We know and have read National Dailies.
We know their publishers and editors.
Eze which is yours or where do you fall?.
A publicist?. To who?.
A junk?. Yes.
Kindly disprove me with facts.

I shall surely return at your further prompting.
I shall call names as witnesses for further and better appreciation of who and what you are.
Ragtag.
Abomination personified.