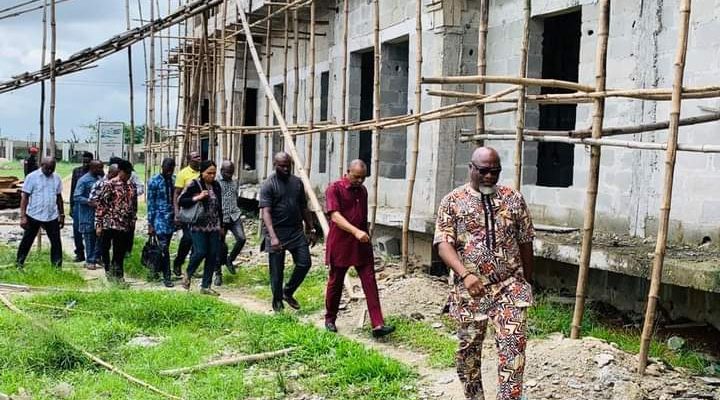 The auditor general of local governments in Rivers State, Mr Bema Friday says he is impressed with the achievements of Emohua local government under the watch of Dr. Chidi Lloyd , describing as unprecedented the array of infrastructural projects executed by the local government chairman within the past one year.

The auditor general stated this when he led a team of auditors to Emohua local government area on a ‘Value For Money Audit Exercise’ on the programs and activities of the local government council on Wednesday.

He said the value for money audit is a credible and professional exercise organised to ascertain the effectiveness and efficiency of the application of public funds by local government council administrations in Rivers State, with a view to promoting accountability and effective service delivery in the third tier of government.

Acknowledging the improvement in local government administration in Rivers State under the present dispensation, the auditor general commended Governor Nyesom Wike for building a system that promotes effective service delivery, stressing that the present crop of council chairmen were able to change the narrative about local government administration in Rivers State because of the state governor’s penchant for service delivery.

The council chairman attributed the achievements of his administration to the none interference of Gov Nyesom Wike led Rivers State government into funds accrued to local governments in the state from the federal allocation.

Dr. Lloyd said his administration is not indebted to any financial institution or individual, stressing that the infrastructural revolution witnessed across Emohua LGA under his administration was accessioned by his deliberate effort to reposition the LGA, to stand out in the comity of LGAs not only in Rivers State but across Nigeria.

The auditor general and his team joined the council chairman to the recently commissioned 1 kilometer Evekwu road, the Elele-Alimini magistrate court complex and the Emohua local government vigilante services secretariat building, for an evidence-based investigation of the already in use projects, all conceived and completed by the administration of Dr. Chidi Lloyd within one year.

Meanwhile, Dr. Chidi Lloyd has disclosed his administration’s readiness to complete the 1.5 kilometer Ukeli road project in Rundele before the end of August. He said the contractor handling the project is expected to commence surface preparation for asphalt laying on the road in the coming days, to deliver the road ahead of the 2nd phase of project commissioning in the area.

See also  2023 Presidency: Jonathan’s Entrance Into APC, a Revenge Scheme Devised to Destroy the Progressives Party and Sabotage the Chances of the South in the Political Equation - Eze

Other projects earmarked for completion ahead of the next phase of project commissioning include the council administrative building, Chief Emeka Woke ICT Studio and the Chief Nyesom Wike Drive.

The council chairman was accompanied by the vice chairman of Emohua LGA, Hon Mrs Edna Nyeche, the head of local government administration, Mr Ben Taol and other principal officers of the council.