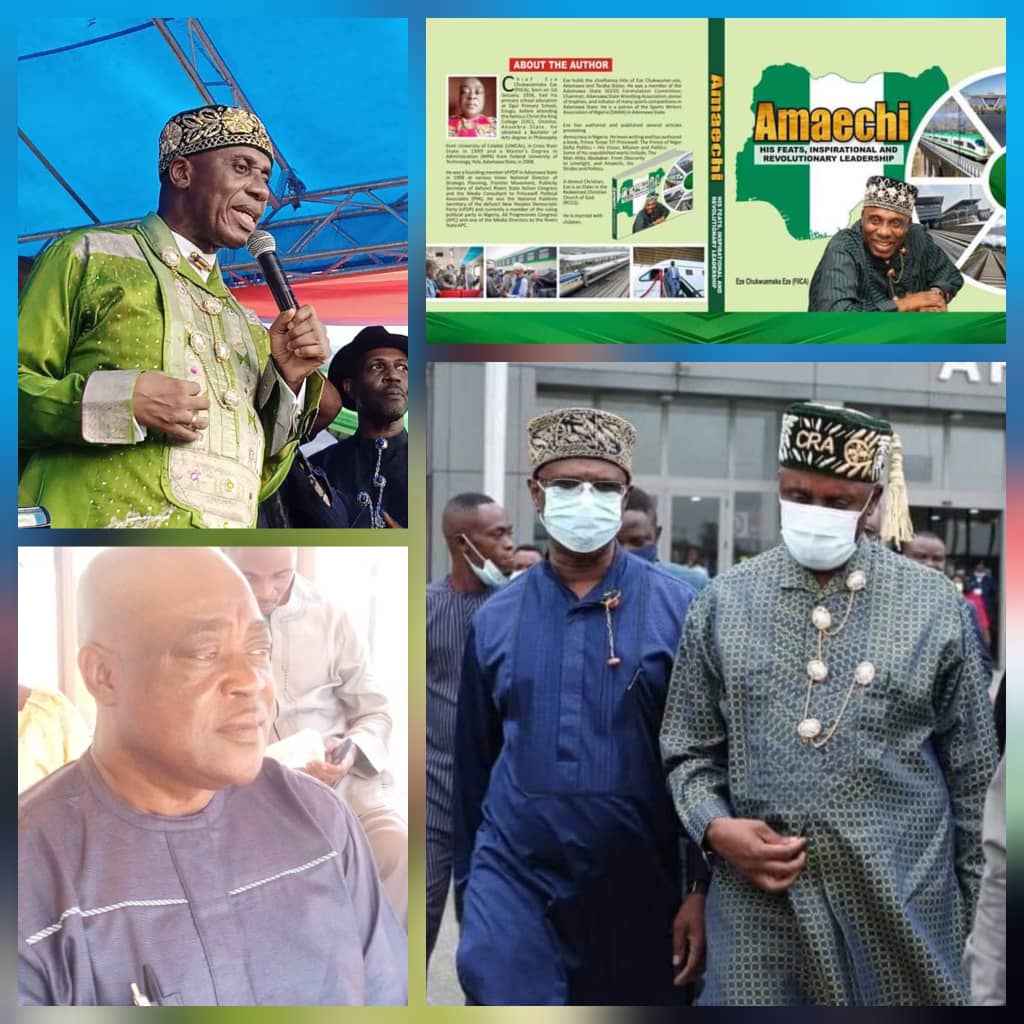 In the introduction to the book on Amaechi titled, “Amaechi: His feats, Inspirational and Revolutionary Leadership”, erstwhile National Publicity Secretary of the defunct New People’s Democratic Party (nPDP) and a member of the APC Legacy Projects Media Team, Chief Eze Chukwuemeka Eze, introduced his good friend and ally, Dr. Dakuku Adolphus Peterside, as a composite of the class of well-bred and consummate politicians from the Niger Delta region of Nigeria who has earned himself a pride of place and found his niche in public administration as the most outstanding Commissioner of Works in Rivers State.

A former member of the Federal House of Representatives and a true gentleman, Eze said, Dr. Peterside was the governorship candidate of the All Progressives Congress (APC), Rivers State, in the 2015 general elections who later served meritoriously as Director-General (DG) of the Nigerian Maritime Administration and Safety Agency (NIMASA) and emerged first Nigerian to
head the Association of African Maritime Administrators (AAMA), a strategic regional body set up to harness the potentials of the African Maritime Industry, with a view to strengthening cooperation at the regional, continental and international levels in harmonizing policies and goals necessary for
the growth of the African Maritime Sector.

He is the author of the bestseller, ‘Strategic Turnaround’, a book which discourses the transformational change in an African maritime administration.

Dakuku, in awe and perplexity of Eze’s wealth of knowledge in his field once exclaimed, “Always VINTAGE EZE, like no other. I challenge anybody in the land today. No journalist has as much information on anybody like Chief EZE C EZE. Chief EZE is without doubt a repository of knowledge”. Such affirmative exclamation from a respected academic and highly revered leader of thought like Dr. Peterside simply lends credence to the widely held view that Chief Eze is a repertoire of contemporary standard in literary mechanics and consequently, one needs no further exposition to quickly align with the opinion of the reading public and leading proponents of truth, who have described the ace Journalist as the numero uno in contemporary journalism.

These and many more, the party Chief said, espouse the common inclination and popular demand made upon him to assist the nation with the responsibility of unearthing some hidden facts about the life and politics of Rt. Hon. Chibuike Rotimi Amaechi, an enigma whose model of leadership and public service is an archetype of its own and qualifies for a study.

See also  Senate President to declare for president this week

Emphasizing the need to preserve the legacies of the most outstanding Minister in the administration
of President Muhammadu Buhari, whose tenure as Governor is known to be the golden age of governance in Rivers State, Chief Eze said Rivers people and in fact, Nigerians picked interest in the sterling performances of Amaechi, first as Governor and now Minister, capitalizing that the he qualifies for a study.

The Foreword and thought of Dr. Dakuku Peterside about the Book on Amaechi:

According to this accomplished Author, Recording events and important milestones for posterity started before formal writing in Mesopotamia (present-day Iraq), where the use of cuneiform was prominent between 3,400 and 3,300 BC, and shortly afterwards in Egypt at around 3,200 BC. The realisation that human memory was short and passage of information from one generation to another unreliable were the primary reasons for this art form.

Record keeping later evolved to literature. And the earliest literary authors recorded events for people to understand why some actions and inactions took place, the evolution of events, and the socio-cultural and political functions of political gladiators and groups. This development led to our ability to reminisce constructively and deconstruct vital lessons from historical events whilst preserving important information.

Chief Eze Chukwuemeka Eze, by this seminal work, has followed this tradition. He has fused the past with the present to create a compelling written documentary about one great political figure of contemporary Nigeria.

For the first time, somebody has looked at classified and unclassified documents, speeches, biographies, newspaper commentaries, and as a participant-observer to document the remarkable life and leadership of Rt Hon. Chibuike Rotimi Amaechi.

More importantly, these events have been put in perspective by someone who was and still is an active participant in the events that defined the politics of Nigeria in the first two decades of the 21st century. This book is a rare collection of essential facts, hitherto not available to most persons who are interested in knowing the truth about the political developments around Amaechi.

Vintage Eze, through this book, provides a wealth of knowledge and insights about how the master political leader in CR Amaechi was able to navigate political landmines and rose to the pinnacle of leadership. Chief Eze’s account provides stories that have not been told before in this way and at the same time brings clues that make the total picture clear.

This book essentially is a new perspective and a compelling first-hand authentic story that only a master storyteller can share.

Chief Eze, through this work, takes the reader through the most significant highlights of the Rotimi Amaechi personae in public life. This account is outside the imagination of those who thought they had information on the Amaechi years.

Chief Eze brings a fresh dimension that clarifies and takes the reader to the inner recesses of how Rt. Hon Amaechi accomplished excellent results despite artificial roadblocks and other challenges.

By reading this book, I am sure you will understand how others view Rt. Hon. Amaechi and what makes him loved, respected, appreciated but also dreaded. Most importantly, it will be for you as it is for me the beginning of a deeper exploration of the quintessential Amaechi.

See also  Why We should Support And give Chinwe Austin Dcheek A chance.

Few persons are more qualified to document Amaechi’s impactful and definitive leadership than Chief Eze. He is a prolific commentator on national and international issues, an accomplished journalist, an excellent reporter of events, steeped in background facts not available to any other storyteller, opinion moulder and people’s advocate.

Eze’s account goes way back to events that shaped Amaechi leading to his (Amaechi) journey of transformational leadership before becoming a political colossus and a national leader of stature. In his days as Governor of Rivers State, as Director-General of President Buhari’s Campaign Organization and as Minister of Transportation, Chief Eze was there and witnessed his numerous battles. He has access to all the political gladiators that no other person within the political ranks has.

Most importantly, he acts out of conviction and deep understanding of the complex web of events that shaped critical historical events in the life of Amaechi.

Finally, I thank Eze for giving me the privilege to read his book before others and an even more incredible honour to write the foreword.

To the Glory of God against all odds the book is ready to be launched in a few weeks time depending on the approval of the man in whose excellence the book is centered around.

As the world awaits the public presentation of this book, I pray and urge us to come to the reality and understand of who Amaechi is and truly is.

God bless us all.