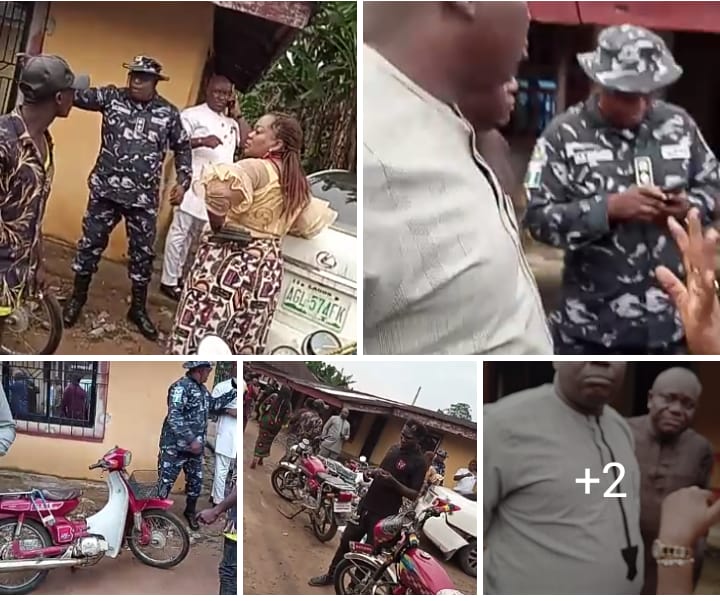 On Saturday, 27th November, 2021 as at 1530 hours, While we were celebrating the age grade Induction in Ibaa Community. CSP. Adeboye Ademola, The Serving Divisional Police Officer in Rumuji and his DCO, SP. OJo Friday in company of few police officers and members of the Disbanded Ospac security in ibaa Community of Emohua Local Government area led by one Ndidi Eke stormed the Compound of Chief Hon. Fubara Ohaka to unlawfully whisk him away with the claims of Order from the Rivers State Commissioner of Police without an invitation letter or warrant of arrest been presented.

As God may have it, on enquiry from the police headquarters it was discovered that the respected and Professional Rivers State Commissioner of Police CP Friday Eboka was not aware of the said arrest besides no warrant of arrest or invitation of any kind extended to the benevolence Honorable Ohaka.

Thanks to God Almighty and the good people of the community who rose in defence of the Ibaa born politician.

To this end. The leadership and entire members of the Fubi Political Associates (FPA) Unequivocally and unanimously State that;

2. That It is appalling on how a serving Divisional Police Officer In Rumuji, CSP. Adeboye Ademola And his DCO. SP. Ojo Friday whose duty and mandate is to protect the lives and properties of everyone under his jurisdiction will be operating freely with members of the Disbanded local Vigilante group led by NDIDI EKE in the area, when it is on record of how Mr. NDIDI OGBUOMA, an indigene of Ibaa and two others including another promising young man from the same Ibaa died following an attack and one lost his life in the process. For more enquiries about this, two of the survival are still critically ill in the hospital receiving treatment for the sake of doubts

Just a week ago, the OSPAC led by Ndidi also stabbed to death a promising young man in the community in the most horrific, barbaric and cannibalistic manner

We are also aware of how the Rumuji DPO, CSP Adeboye Ademola and its DCO, SP Ojo Friday handed over a suspects popularly called Big Daddy over to members of the local vigilante to kill in return to indict Chief Hon Fubara Ohaka, claiming he made a useful confessions without bringing the same person up to reinstate his confession.

3. Mr. Friday Umesi, an Indigene of Ibaa Community was beating mercilessly on the 18th of October for no reason leading to the health challenge he is facing now after several days spent in the hospital action carried out by the same dreaded Blood sucking members of the group in Ibaa Community. Same matter was reported to the division under the watch of CSP. Adeboye Ademola and the DCO, SP Ojo Friday and no single arrest has been carried out till date.

4. Mr. Chinaokwu Ugorji, an indigene of Ibaa Community was beating to coma using machete and guns by the same disbanded members of the ISPAC led by NDIDI Eke and reported to the division under the watch of CSP. Adeboye Ademola, and DCO, SP Ojo Friday till date no single arrest was made.

5. Mr. Ndubisi Nlerum, a transporter who hails from Ibaa, His son Mr. Prince Chinonye Nlerum was whisked Away by the same dreaded Disbanded members of ISPAC with Claims that the boy is in their Custody in Omoku, with several Complaints made to CSP. Adeboye Ademola and DCO, SP Ojo Friday, No single arrest has been carried out till date.

6. We have a credible information on how the DPO, CSP. Adeboye Ademola and his DCO, SP. Friday Ojo is Collaborating with the disbanded members of Ispac in Ibaa to continue harassing and intimidating the people the reason he has refused to arrest them and allow justice served for several unlawful killing of innocent citizens of Ibaa and other neighboring communities.

7. It might interest you to know that on assumption of office the Local Government chairman of Emolga Dr Chidi Lloid disbanded the local vigilante group and this singular act was greeted with accolades across political divides, considering how unlawful their act has been in the community, and how hopeless the community has become due to their presence.

8. The general public should hold the DPO in Rumuji CSP Adeboye Ademola, his DCO, SP. Friday Ojo, the Disbandeded ISPAC led by NDIDI EKE responsible if anything happens to Chief Hon. Fubara Ohaka, his family and his Political Associate and a break down of law in Ibaa Community, Emohua local Government Area, Rivers state Accountable.

See also  Rivers and Flyovers: A Stirring Tale of Woeful Misplacement of Priority Under the Watch of a Clueless Political Acrobat.

9. On this note, we call on the Inspector General of Police, IGP Alkali Usman Baba, The Executive Governor Of Rivers State, Barr. E.N Wike and The Professional Rivers State Commissioner of Police, CP Friday Eboka to direct the Rumuji DPO, CSP Adeboye Ademola and his DCO, SP Friday Ojo to produce Big Daddy, Taata, Chinedu Amesi who were taken away by ISPAC members under his supervision.

We also call on the Police Service commission, Inspector General of Police and the Rivers state Commissioner of Police to Use their good office to investigate CSP Ademola Adebaye and his DCO, SP. Friday Ojo in Rumuji Division as this will go along way in rekindling our hope and confidence in police as citizens of the state.

Thank you and God bless you all!