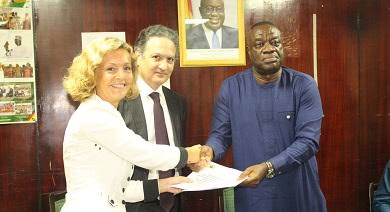 Join Our Channel
Ghana, Spain News- The government has signed a Memorandum of Understanding (MoU) with the government of Spain to create about 1 million jobs in the tourism industry value chain in the next three years.

The MoU, which forms part of the strategies adopted by the government through the Ministry of Tourism, Arts and Culture,is targeting about $5 billion annually as proceeds from the industry and two million tourists as well.

The Minister of Tourism, Arts and Culture, Dr. Ibrahim Mohammed Awal, yesterday signed the MoU on behalf of the government in Accra, while MarCassanovaLlorene,in charge of  International Affairs for Incyde Foundation, signed for the people of Spain.

Present at the signing were a delegation from the Spanish Embassy in Ghana, led by the Ambassador, Mr Javier Gutierrez;  the Deputy Minister of Tourism, Mr Mark Okraku Mantey, and  directors at the Ministry.

Dr Awal said tourism was adynamic economic sector which had the potential to create jobs for the teeming unemployed youth in the country.

He said Spain had a population of 40 million with about 80 million tourists  visiting the country yearly, adding, “Ghana is committed to learning from their experiences to boost our tourism industry.”

“About 120,000 people in the catering services, hotel industry, arts and other services that play major roles in advancing the tourism industry will be trained to equip their skills and knowledge through workshops and forums.

“Ministry, through some of these strategies, is expecting to build a vibrant industry to generate revenue and create jobs,” Dr Awal said.

Madam Llorene saidIncyde Foundation was the foundation of all chambers of commerce in Spain, which represent the private sector in the country.

She said the foundation had been working for the past 20 years supporting businesses to compete on the international market, and expressed the belief that  the agreement was an opportunity for Ghanaian businesses to build their capacity.

“Tourism is a key sector in the development of economic successes. Spain has a lot of expertise to add some value to that of Ghana, as Spain is the second country in the world with about 80 million annual visitors,” she said