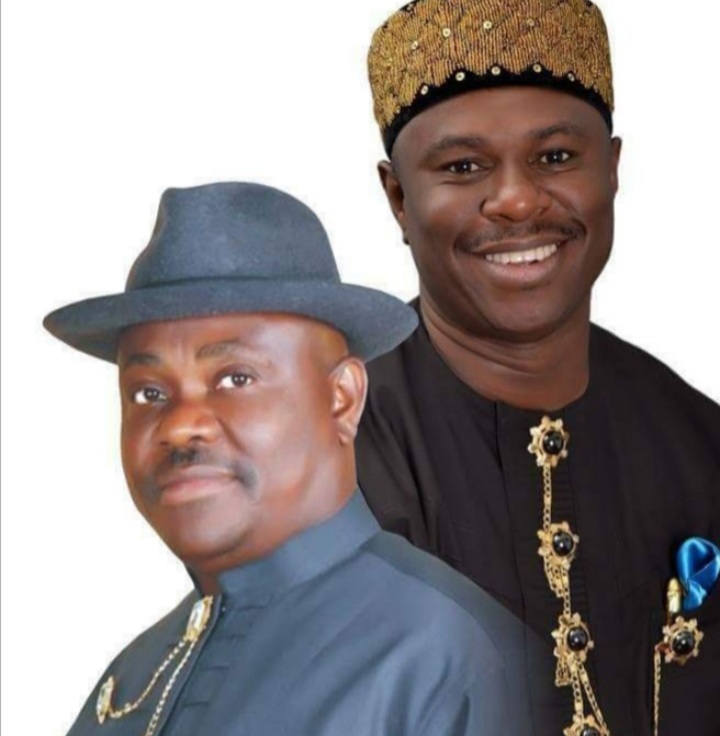 The former governorship candidate of the All Progressives Congress (APC) in Rivers State, Dr. Dakuku Peterside has rubbished Governor Nyesom Wike’s pretense as an apostle of free and fair elections in Nigeria.

He has also described the Rivers governor as the worst hypocrite in the Nigerian political space since the return of democracy in 1999.

Peterside, who stated this in a chat with journalists in Port Harcourt, was reacting to statements credited to Wike, who alleged plots to rig the 2023 election, in addition to perceived excessive borrowing by the Federal Government.

He noted that the Rivers governor is the notorious culprit of everything he accused the federal government of plotting and committing.

According to him, Wike has gained notoriety for all manner of electoral fraud, bribery of INEC officials, wilful borrowing, and stifling of the state’s legislature.

Said he: “Here is Wike that the Appeal Court agreed that he mindlessly rigged 2015 governorship election, with the death of hundreds of Rivers people and usage of underhand tactics to ride into power.

“Rivers people lost their loved ones in no less than six LGAs all because of the desperation of one man who sadistically chose to grab power by all means possible.

“This is the same governor who is on record to have given INEC officials over N300m to rig election in Rivers State, the same man who is alleged to have bribed judges to sway decisions in his favour.

“How can such notorious person pontificate over how to conduct free, fair and credible election? He has absolutely no moral right to speak on credible electoral processes.”

Peterside, a former House of Reps member, queried Wike for condemning FG’s borrowings, when the same governor has borrowed over N300bn despite increased allocation, Paris Club refund, among others from the federation account and internally generated revenue.

“As of today, Rivers State government is owing over N300bn from different sources. This is an administration that has received N110bn from Paris Club refund, N78bn for roads constructed by his predecessor, over N2.5trn from federal allocation without commensurate works to show for it.

“ *Only yesterday, the state executive council approved further borrowing of N25bn without stating where the money would be borrowed from and how much is allocated to each of the items that necessitated the borrowing; things are just shrouded in secrecy and lack of open bidding or following due process.*

“Under Wike’s administration, Rivers people have not been opportune to see the state’s budget in the last six years, hence do not even know what is contained in it and be able to benchmark his claims,” he stressed.

The immediate past DG of NIMASA blasted Wike for talking about the independence of legislature when the Rivers State House of Assembly has been castrated by his whims and caprices.

“Rivers State House of Assembly only sits when Wike orders them to do so. Even when the National Assembly and President Buhari called for States’ Legislature autonomy, the governor told his boys to reject it.

“Only last week, the Rivers State House of Assembly members could not sit because the roof of the hallowed chamber is leaking seriously, forcing his rubber stamp legislators to scamper for safety.

“I really sympathise with the legislators, who are afraid to even debate matters of their own welfare on the floor of the house for fear of the emperor, who may order stoppage of their salaries,” he stated.

Peterside summed up by saying that discerning Nigerians know who is Wike and would not be swayed by his fake conversion to an apostle of democratic ideals.

Gov. Wike Has No Moral Uprightness To Talk About Credible Polls: Rivers Owing Over N300bn – Dakuku

One Comment on “Gov. Wike Has No Moral Uprightness To Talk About Credible Polls: Rivers Owing Over N300bn – Dakuku”