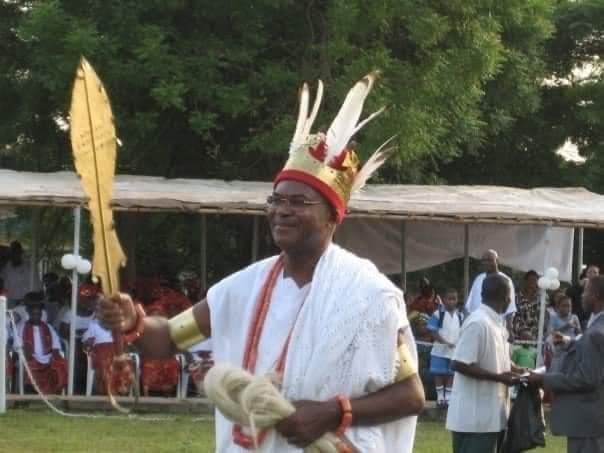 Onitsha in one of its most plausible traditions, was founded when Chima led his kindred from Benin during the reign of Oba Esigie (c.1517-c.1550).

It is likely that these migrants came from a conquered homeland, Ado na Idu, in western Igboland, probably located between Igbodo and Onitsha-Ugbo. Upon the death of their leader, Chima, the migrant party divided at the Niger River, one session crossing it to found Onitsha at a safe distance from the waters. This new abode was occupied by Oze people, who are now pushed to a side nearby, retaining separate identity.

Onitsha of the 19th Century lied farther away from the waters than it is now, and the banks of the river was mostly uninhabited. The town, quite prosperous by standard of the time, was seemingly divided into two by a road which is on each side blanketed by plantations like yam, corn and cotton by which the people manufactured their own clothes. Houses were made of mud, and had no rooms but mere oblong verandahs. Onitsha, like other riverine towns shared in the volume of trade increase of the 17th and 18th Centuries owing to the thickening of slave trade.

By the middle of the century after, British Naval doctor, William Baifur Baike had explored the river of Niger enquiring about igbo past. The gory picture painted in his report may have stirred the Christian Missionary Society who, led by Samuel Ajayi Crowther and John Taylor in 1857 followed the advent of British traders in palm oil already having a permanent post. This fact contributed perhaps to the failure of the natives to see the difference between the missionaries and the traders.

Onitsha had welcomed the British modernizing ideals, and the Christian religion wearing their hearts on their cheeks. They persisted in or became indifferent to horrible practices of their pagan religions, which included human sacrifice, and the killing of twins. It appeared Anglican missionaries were missing a thing- for the reception French man, Father Lutz got was by far more sincere.

When Lutz met the Obi, king of Onitsha, he got the piece of land that was earlier denied Bishop Crowther. Also, Lutz preached the gospel to the Igbo people of Onitsha from the perspective their reality would most readily allow them to understand. He did not turn down their invitations to dinner. The Catholic Church which he planted in 1884, almost three decades after the Church of England, blossomed till it overtook the former in member strength.

With the suppression of slave trade in the Niger, and the introduction of steam engine, palm kernel and palm oil which has been produced commercially for centuries down south in the Bight of Biafra was now moved up the hinterland through the river.

Onitsha became inevitably, a river port town of bolstering trading activities, attracting immigrants from other Igbo towns and British merchants. Onitsha served as a gateway between the channels of commerce on River Niger and towns that formed its hinterland like Obosi, Nkpor, Obba, and Nnewi. From this gateway also, Christianity spread into many parts of eastern Nigeria.

The Royal Niger Company chattered in England to do business in the Niger established an important post in the town. Schools were built and order established among belligerent neighbors. In 1886, the company made treaties with Onitsha, as it did many towns along the river to check the influence of the French in the Lower Niger.

The king and chiefs of Onitsha, in appreciation of the benefits derived from these civilizing agents ceded their land to Britain without reservations, except that they did not understand the clause that requires them to trade exclusively with the British company. While holding sway administratively in the south of Nigeria, the company blockaded Onitsha because native traders refused to cooperate with its policy of monopoly. Instances of conflicts like this would lead to the withdrawal of the company’s chatter by London. By the dawn of the year 1900 the city had come under direct British governance as a protectorate.

Onitsha was subsumed under the Southern Nigeria protectorate, but colonial authority only ruled through the native authority headed by the Obi, whose jurisdiction became extended by necessity beyond traditional boundaries. From 1955 the town had the waterside and the inland settlements united under a single municipal government having more elected officers than arbitrarily co-opted traditional aristocrats.