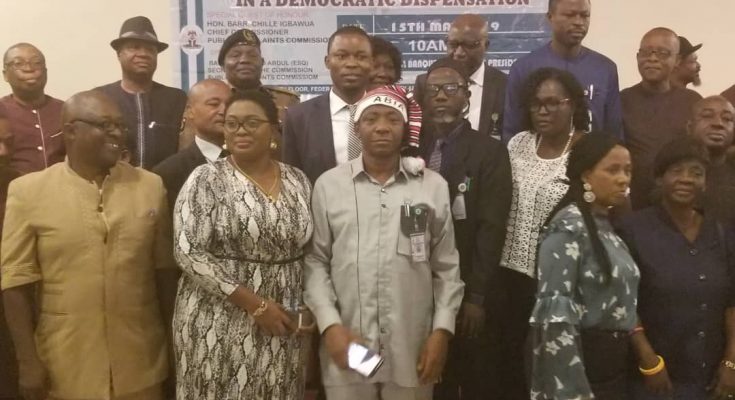 HOW WE RESOLVED COMPLAINTS AND CASES AGAINST SPDC AND OTHER MULTINATIONALS IN RIVERS STATE. WHY WE HONOURED SPDC WITH PEACE AMBASSADOR AWARD IN 2021.

On 28th May 2018, The Federal Government of Nigeria through the National Assembly appointed me and my colleagues as Federal Commissioners in The Public Complaints Commission representing our various States for a Constitutional tenure of three years.

My mandate and job was to investigate administrative injustice and Maladministration at all levels of Government and Corporate Organizations amongst other mandates of the Commission through the alternative dispute resolution mechanism.

Upon resumption, I organized a case review and discovered avalanche of unresolved complaints and cases from host communities and stakeholders against SPDC and other multinationals in Rivers State. I saw copies of letters of inquiry written to the companies without a response. I demanded an answer from my staff why SPDC was not responding to the letters and they said they had nobody to talk to. The staff complained that Multinationals were impenetrable.

I thereafter invited all the complainants to my office for one-on-one conversation for more details about their complaints and grievances. I asked them who was in charge of community issues in SPDC and they mentioned Mr. Igo Weli who was then the General Manager in charge of External Relations.

I got Mr. Igo Weli’s number and sent him this text message ” Good morning Sir. My name is Marshall Israel. I am a Federal Commissioner in the Public Complaints Commission, representing Rivers State. There are complaints against SPDC and I desire to meet you and have a conversation with you, aimed at looking at the complaints and resolving them”. He immediately called me and we exchanged pleasantries and agreed to meet in his office the next day. From our phone conversation, I noticed he was eager and ready for an engagement.

See also  Osun APC: Rep Taiwo Oluga Speaks On The Crisis Between Aregbesola And Oyetola, Says It Is Their Followers That Are Causing The Rifts

Like many Nigerians, I had an impression about SPDC; a wrong one for that matter based on the stories I had heard. I met Igo Weli with my Assistant Director of Investigation Mr. Kue Bonaventure. We had a fruitful conversation. Mr. Igo Weli explained the position of SPDC on the Complaints and assured me of his readiness to meet with the complainants for an effective engagement and resolution of the complaints.

That meeting and my subsequent engagement with SPDC and host communities changed my perception about SPDC and some Multinationals. While I agree that SPDC and some Multinationals may not have done enough to impact and support host communities in line with the corporate social responsibility principle, it’s glaring and regrettable to note that the much they have done in some communities have not been fully accounted for by those managing the funds coupled with internal disagreements, lack of transparency and corruption by some community representatives.

Some of the complaints were frivolous, untrue, inconsequential and baseless. We handled genuine ones and he appointed a staff to be liaising with the PCC. I invited the Complainants and SPDC representative for a case conference in my office and we trashed every complaint and sent our report to relevant agencies and stakeholders.

Mr. Igo Weli further suggested that instead of blockade, protest and litigation, aggrieved members of the host communities and stakeholders should be channelling their complaints to SPDC through the Public Complaints Commission because its less stressful, timely and worthwhile and that he was ready to receive and attend to all our letters of inquiry.

By constantly appearing on a live radio program, we were able to get feedback from host communities and handled a lot of complaints. It made our job much more easier. We used the opportunity to encourage people to embrace ADR, dialogue and negotiation because they are flexible, cost-efficient, time-effective, and gives the parties more control over the process and the results. Parties who resolve their disputes through ADR are generally more satisfied because they directly participate in working out the terms of their settlement.

After some months, we decided to organize a seminar on “Alternative Dispute Resolution” as the only panacea for sustainable peace and development in the Niger Delta. After preparing the proposal and cost implication, funding became a challenge. I officially approached SPDC through Mr. Igo Weli for partnership and sponsorship. SPDC replied and agreed to partner and participate.

The Workshop was fully funded by SPDC and was held at hotel Presidential. We invited all heads of Federal and State Government agencies in the Niger Delta, Military and paramilitary heads, Chiefs, Traditional rulers and Community youth leaders, Nigerian Barr Association, Human Right Organizations, Journalists, Non- Governmental Organizations, Managing Directors and Managers of Banks and Multinationals for a one day Workshop on “Alternative Dispute Resolution”.

As one of the guest speakers, Mr. Igo Weli took time to explain to the audience the contributions of SPDC in Nigeria and Niger Delta in Particular. He painstakingly answered questions from aggrieved members of host communities and critical stakeholders.
While assuring the audience that SPDC was committed to peace and community development, he decried the level of hostility against SPDC and called for dialogue and engagement instead of sabotaging and vandalizing facilities and installations as development does not thrive in an atmosphere of rancour and crisis.

Towards the end of my tenure as Federal Commissioner, I decided to honour SPDC with Ambassador of Peace Award because of her adoption of ADR and commitment to Peace and development in the Niger Delta. The idea was to encourage SPDC and other Multinationals to do more in supporting and developing host communities.

Mr Igo Weli, SPDC General Manager, External Relations, who received the award on behalf of the company’s Managing Director and Country Chair, Shell Companies in Nigeria, Osagie Okunbor, thanked PCC for the recognition. It’s incumbent and expedient that I put this record straight for the benefit of those who have been asking and wondering why we honoured SPDC with Ambassador Of Peace Award.

One Comment on “HOW WE RESOLVED COMPLAINTS AND CASES AGAINST SPDC AND OTHER MULTINATIONALS IN RIVERS STATE. WHY WE HONOURED SPDC WITH PEACE AMBASSADOR AWARD IN 2021 – Marshall Israel.”