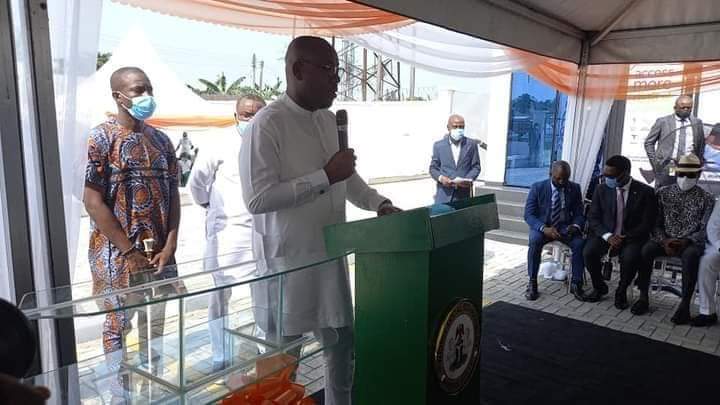 The Executive Chairman of Ikwerre Local Government Area of Rivers State, Chief Engr Samuel Nwanosike (JP, PhD), Onwa Nabganu Oha Ikwerre, has clarified that he did not see any dime from the transaction of Access Bank Plc, Isiokpo Branch, as speculated by some persons who do not mean well for him and his government.

Dr Nwanosike made the clarification on Tuesday during the commissioning of the Isiokpo Branch of Access Bank Plc by the Nyenwe Ali Isiokpo Ancient Kingdom, His Royal Majesty, King Blessing Wagor (JP).

He said, “This event today has vindicated me, Eze, Engr. Samuel Nwanosike, PhD, as Executive Chairman of Ikwerre Local Government.

“Of course, when we had this vision and I made a phone call to our brother and those that work around him, I told them that we were ready to give this piece of land, because they said charity begins at home. It would be a misnomer if our brother will be a shining star all over the world and has no presence in where he is born and when he retires what will be bring out as a legacy that he has brought to his people. And so he got to his dream, send his king to me and we brought this piece of land to our brother to do this development.

“But, you know in every twelve there is always a judder. And among those who work with us and some of our leaders who do not understand the indices of Economics and the indices of governance, they started throwing stones at us, even tried to raise an impeachment against my person in my first term, went to radio, made all amount of allegations that I have sold Council’s land and I have embezzled the money. But let it put on record today that the money paid by Access Bank was paid to Ikwerre Local Government projects account, not paid to Nwanosike Samuel or any company of my interest. It was paid to Ikwerre Local Government Council’s account and Access Bank is here to verify this”.

The Executive Chairman of Ikwerre LGA avowed that the Leader of Ikwerre Legislative Assembly, Hon Nwobuisi Chikwe-Tasie, can bear him witness that the fund regenerated from the leading of some portions of Council’s land to Access Bank Plc was used to construct three projects for the good of Ikwerre people.

According to him, “I can say that the Leader of Council is an Isiokpo son, a very prudent and erudite Leader of the Legislative Assembly. He is aware that we agreed that the fund for this agreement that we’ve done with Access Bank would be used to develop the infrastructure we met decayed in Ikwerre Local Government. And I can mention the three following projects; Isiokpo ultramodern town hall – 1000 seating capacity built in Ward 2, the fund was part of those mobilised for the contractor; Isiokpo market, by the bridge, the fund was one of the funds given to the contractor, which is an Isiokpo son; Elele 26 stable market that has been commissioned was part of the funds given. These three checks were written and signed by the three principal officers of Council and given to these contractors direct.

“And so, Nwanosike Samuel did not see a dime from the transaction. But my joy is that finally these edifice is standing to vindicate me as young growing man”.

The Ikwerre Council Chairman pleaded with the Group Managing Director (GMD) of Access Bank to establish other branches at Elele and Igwuruta. Revealing that development has moved from the city down to Ikwerre LGA.

He commended Dr Wigwe for the supports he has been giving to Ikwerre Communities and Gov Nyesom Ezenwo Wike. Asserting that it is possible to have a new Nigeria through Gov Wike.

“We want you to join other of our leaders in begging him to run than election. Please, in your quiet time, tell him not to be afraid of that giant that has a red eye because my late father said we don’t know if while coming back from farm stick fell and hit him on the face”, Dr Nwanosike said to the Isiokpo born GMD of Access Bank Nigeria Plc.

Meanwhile, he expressed delight that an Ikwerre man became the Archbishop of Niger Delta Province of Anglican Communion, Governor of Rivers State back to back and had Dr Herbert Wigwe in his time as a local government chairman. Saying that the entire people of Ikwerre land were proud of Dr Wigwe for being compared with the likes of Alhaji Aliko Dangote.

Meanwhile, the Ikwerre LGA Chairman, on behalf of his wife and Ikwerre women, presented some food stuffs to Dr Herbert Wigwe and his family.

Speaking, the GMD of Access Bank Plc, Nigeria, Dr Herbert Wigwe, stated that he established Access Bank Plc in his hometown so as to bring more development to the community. Saying that he and every other Isiokpo son and daughter who are doing well owe it as a duty to develop their community.

Dr Wigwe said that through Access Bank he would be supporting the people of Isiokpo with interest free loans in order to start their businesses, loans to send their children to school and contribute in ensuring continued peace in Isiokpo.

While agreeing to establish Access Bank branches at Elele and Igwuruta, he urged everyone, especially in Isiokpo and Ikwerre LGA, to open an account with the bank as a way of encouragement.

In their vote of thanks, Pastor Shingle Wigwe, former Director General (DG) of the Nigeria Television Authority (NTA) and father of the GMD of Access Bank Nigeria, and Dr Chris Oyirinda Amadi, former Executive Director of Finance and Administration (EDFA), Niger Delta Development Commission (NDDC), and a protege of Dr Herbert Wigwe, thanked everyone for gracing the occasion. Noting that Access Bank Plc, Isiokpo Branch, is a bank for Isiokpo and Ikwerre LGA people.

The Chairman of Ikwerre LGA was accompanied to the commissioning by his Chief of Staff Hon. Darlington Orji JP, the Council Secretary Hon. Prince Lemchi Nyeche JP. and other political appointees and members of Ikwerre Legislative Assembly.