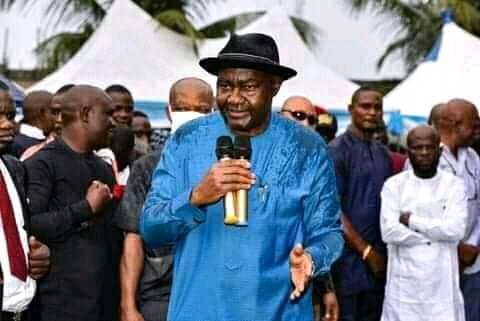 An All Progressive Congress Chieftain, Senator Magnus Ngei Abe in his words said if not for Him, Rivers APC would have been dead by now

According to the information gathered, the former lawmaker while addressing his supporters boasted that he is much on ground and no one should be afraid. “We are Apc, without me and you There will be no Party called Apc in this State. They said we are finished but tell them we are still much active waiting for the decision of the National Working Committee of the party that pleaded with us to calm down so let’s still be calming down”

He further stressed that party structure does not win election despite their money and Connection and promised to strike at the appropriate time Ashley he maintained that Rivers State Can not do without Him.

Senator Abe and his former Boss, Hon. Minister of Transportation, Rt Hon. Chibuike Rotimi Amaechi have been in Court since 2018 over who Controls party structure in the state but it all seems not to be alright with the senator.

If not me, Rivers Apc would have been dead – Abe

See also  Amaechi gets Abuja delegates nod as he vows to treat FCT like a state of its own.