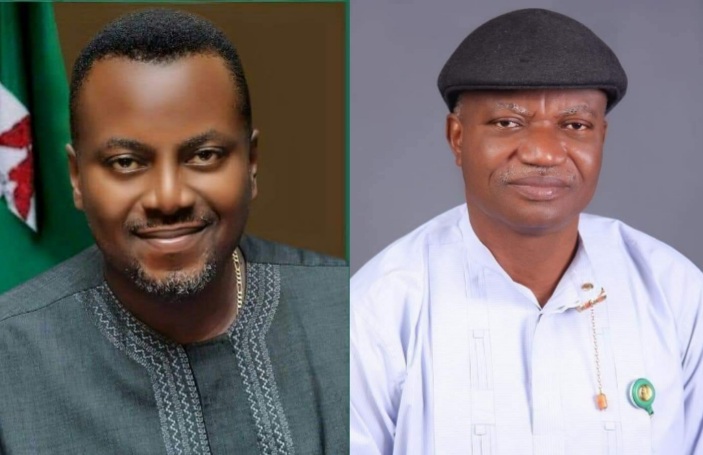 The atmosphere of Igwuruta community in Ikwerre Local Government Area is currently tensed and may snowball into crisis if not nipped in the bud.

The construction of internal roads project which is expected to commence any moment from now is the centre of the looming crisis.

Recall that Governor NYESOM WIKE has during a visit to the LGA last year announced the award of construction of Igwuruta internal roads project.

The Rivers Commissioner for Works, ELOKA TASIE-AMADI and the member representing Ikwerre/Emohua Constituency in the House of Representatives, BONIFACE EMERENGWA are said to have set the stage for war over the appointment of a Community Liaison Officer (CLO) that will interface between the construction company that is to handle the job and the community.

Community sources alleged that the Commissioner for Works in the state, ELOKA TASIE-AMADI and the member representing Ikwerre/Emohua Constituency in the House of Representatives, Hon. BONIFACE EMERENGWA have in connivance secretly handpicked one KENNETH AMADI as the CLO and hoodwinked the over 84 year-old traditional ruler of Igwuruta community, Prof. SAMUEL NNADI WEKE to sign a document endorsing their hand picked CLO.

Many indigenes of Igwuruta community are angry that the purported appointment was made without any form of consultation with any stakeholder of the community; including the politicians, opinion leaders or the chiefs.

Some indigenes according to our informants, are determined for war, even to the point of disallowing the commencement of the project untill the issues surrounding the appointment of a CLO is resolved by majority of the community indigenes.

Angered by the lack of due process in the appointment of the CLO, cabinet members of Igwuruta Council Chiefs in a meeting, queried the traditional ruler of how he came about the nomination and appointment of a CLO without knowledge and input.

Community sources told Brave Views that Prof. WEKE told his chiefs that ELOKA and EMERENGWA brought a document to his palace to sign and that he had no choice but to endorse it.

When contacted, the Works Commissioner, ELOKA TASIE described the allegation as infantile and community gossips, saying that the traditional ruler is in the right position to answer the question, as he was busy with the construction company and not like to discuss community rep.

However, when Brave Views visited the Palace of the traditional ruler of Igwuruta on Sunday, Prof S.N WEKE admitted he made the appointment, boasting that they told him it was his exclusive right to do so.

He noted that after the appointment, he communicated his decision to his council of chiefs and that no body has come to challenge him since then.

On his part, a leader in the community and former Secretary to Ikwerre LGA, OBINNA EKEM, described the development as unfortunate, stressing that some persons are trying to cause crisis in the community by unilaterally appointing a CLO without consultations with the political class and the traditional institution.

OBINNA EKEM while responding to a question on the alleged involvement of EMERENGWA, wondered why the Federal lawmaker, who is the leader of the Ward is afraid of his people, who have graciously supported him all through his political career.

He said EMERENGWA could not summon the courage to call his people to tell them what he wants, because he mistreated the people and abandoned them.

The community leader said the people would have supported Hon. BS EMERENGWA, if he had drawn them closer to make his request that he needed to nominate the CLO but rather decided to run from pillar to post.

EKEM said that EMERENGWA should be held responsible for any crisis in the community for taking unpopular decision.

The former Secretary of Ikwerre Local Government Council, OBINNA EKEM, however assured that the road project must go on despite all odds

OBINNA EKEM praised governor NYESOM WIKE for remembering Igwuruta community by awarding the internal roads to the community, a fit, he said, no successive administrations in the state and federal government have achieved, despite the huge contributions of the community towards the economy of Rivers State and Nigeria at large.

“It is on record that Igwuruta has major oil facilities, we have a flow station, two gas plants and manifold, pipelines and over 57 oil wells, producing over 50, 000 barrels of oil on daily basis”.

He said the name of Governor WIKE would remain in the annals of history of Igwuruta people.