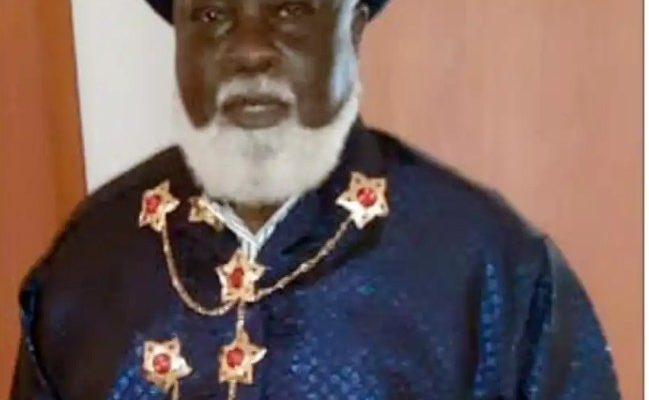 Prominent South-South Leader, His Highness Arabs Sara- Igbe, Lashed Out At Wike, Accusing Him Of Hatred For The People Of Kalabari Ethnic Nationality And Ijaw Nation At Large. Read Full Article

The Niger Delta leader also alleged the governor directed his appointees of Kalabari extension not to attend the burial ceremonies and that he contributed nothing, the reason for which former Minister of Transportation, Rt Hon. Rotimi Amaechi tongue-lashed the governor, who attacked his predecessor, weekend. Continue Reading

He said: “It is appalling and most regrettable that the Rivers State Governor, Wike, rather than exhibiting a high level of maturity, responsibility, responsiveness and provide good leadership, anchored on equity fairness and justice, has politically and economically emasculated and enslaved the people of Kalabari ethnic nationality and Ijaw nation by extension since assuming of office as governor. “

“It is also unfortunate that rather than evolving measures that would foster cohesion and peaceful co-existence amongst the people, and give all ethnic nationalities in Rivers state a sense of belonging, Governor Wike has openly shown his disdain, absolute hatred and nepotism against the people of Kalabari Kingdom and the Ijaw nation at large.

“Just last week, the governor shamelessly drove through the dilapidated road leading in and out of Kalabari kingdom and Obuoma , the home town of his Deputy Governor.

“The Emohua/Kalabari road which is riddled with dangerous potholes and gullies has become commuters’ nightmare and this has been further exacerbated by heightened insecurity in the area with kidnapping and other violent crimes, occurring on a daily basis.

See also  Aides of wife of former governor of Rivers State and founder of ESI, Dame Judith Amaechi Calls for Amaechi to join the 2023 presidential race

“It is sad that despite knowing how insecure the area has become due to the deplorable state of the road, the governor has bluntly refused to rehabilitate the road or undertake any remedial work to ease the difficulties of the Kalabari people who uses the road.

“To further express his dislike and hatred towards the Kalabari ethnic nationality and the Ijaw nation as a whole, Governor Wike was visibly absent at the funeral of a prominent nationalist, a four-time Minister of the Federal Republic of Nigeria, an illustrious son of Rivers State and an elder statesman Alabo T.O Graham Douglas, who was laid to rest, over the weekend.

“It is disheartening that the Rivers State Government under Governor Wike refused to make any contribution for the burial of the founding Leader of the democratic dispensation of Rivers state, who made an invaluable contribution to growth and development of Rivers state, Niger Delta and Nigeria at large.

“To God be the glory, Alabo T.O Graham Douglas was celebrated at his burial by Nigerians from all walks of life within and outside the country , including the political elite, kings, chiefs, elders, youths and women.

“The Governor of Bayelsa State and other prominent senior citizens across the country, took the shine off the Governor of Rivers state who was conspicuously absent in the week-long celebrated burial ceremony. What a shame of wickedness and hatred.

“How much longer will it take the people of Kalabari and the Ijaw nation to realize the level of hatred Nyesom Wike has for them?

“For the governor to desecrate the House of God by standing on the pulpit of God and swearing for the Ijaw nation is the height of hatred for a people, who are the reason for the 13 per cent oil derivation accruable to Rivers state, which has made him arrogant and tyrannical.

“The claim by Governor Wike of spending over N50 million on the health of Alabo T.O Graham Dauglas while he was alive is incongruous and diversionary.

” Governor Wike’s concern towards Alabo’s health was for political reasons, he was not sincere.

“His concern was not borne out of love and sympathy for the bereaved, if not he would not be so insensitive and unsympathetic to the extent of abandoning the family members, Kalabari people and the Ijaw nation at a such a critical time regardless of the reason.

“Nothing can justify the absence of the governor at the burial and his refusal to make any contribution to the funeral of the nationalist.

“Nothing can also justify the directive and stern warning given by the governor to his appointees of Kalabari extraction as well as Local Government Chairmen and elected public office holders in Rivers State to stay away from the funeral of the elder statesman Alabo Graham-Douglas.

“May I , therefore, use this medium to appeal and as well advise the Ijaw nation, and the Kalahariems in particular to see the governor for who he is, and understand the level of hatred he has for our people.

“We should stop being fooled by the governor about his intentions, in his fight for political position in his party, with the dubious claim of fighting for the people of Rivers state.

“Governor Wike has no one’s interest in his politics of abuse and insults. He is in politics to grab power, which to all intents and purposes, is motivated by his greed and selfishness.

” We should not be deceived to reward Nyesom Wike with a third tenure in the state through his proxy who will only be in government house to serve him, ” he said.