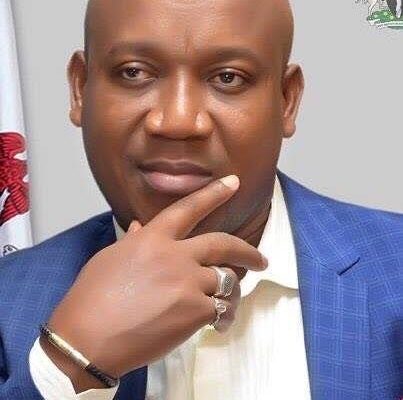 Recall that Dr. Abati, an ace journalist and public affairs commentator, had in one of his programmes in Arise TV took a swipe at the Rivers Governor over his misunderstanding with the Peoples Democratic Party (PDP) presidential candidate, Alhaji Atiku Abubakar, on running mate’s brouhaha.

Dr. Nwanosike, while speaking with newsmen at his office, Isiokpo, on Tuesday urged Nigerians to disregard the outburst of Dr. Reuben Abati because he does not understand the discussion that took place between Gov. Nyesom Ezenwo Wike and his team, while advising Dr. Abati to properly advice his boss.

According to Dr. Nwanosike, “I will advise him to advise his principal properly. A man that won a presidential ticket and wants to win an election should not send attack dogs to attack those who will gather votes for them.

He decried the rate at which men who are meant to be upright and truthful are attacking and bullying some others because they have easy platforms.

Dr. Nwanosike avowed, “It’s a shame that we have gotten to a level in this country where men who are supposed to say the truth will wake up in the midnight because they have a platform, they have the opportunity and then want to bully other Nigerians who are eminently qualified, even more qualified than them into a position that will suit them”.

He acknowledged that Dr. Abati raised some critical issues, but wondered why a first-class material like him has failed to proffer any solution to the issues bedeviling Nigeria.

“Dr. Reuben Abati is or has raised some critical issues. Issue number one, that he started writing and practicing journalism since 1985 and he made a first class in the University of Calabar. It’s a great achievements. But the only problem we have as Nigerians is that all issues, being a first class graduate and started writing since 1985, has he produced any result in the Nigerian issues?

“As a first graduate, he is supposed to be one of the Nigeria’s best”, the Executive Chairman of Ikwerre LGA said.

He regretted that Dr. Abati bullied former President Goodluck Ebele Jonathan to appoint him as Presidential Spokesman, but rather worked in connivance with the opposition party to ensure Jonathan’s failure.

“He bullied President Goodluck Jonathan into giving him an appointment as Press Secretary. Between 2012 and 2013 President Jonathan was considered the best and Nigeria was adjudged one of the fastest growing economies in the world, yet Lai Mohammed came and sold lies to Nigerians not to appreciate the good works of Jonathan and this Reuben Abati couldn’t do anything to sell the good works of President Goodluck Jonathan because he doesn’t have the capacity.

“In fact, we can accuse Reuben Abati of sabotaging or as one of those who sabotaged the victory of President Goodluck Jonathan. That’s why Jonathan lost that election.

“And today, Reuben Abati’s failure has brought us the destruction of lives and property we have in Nigeria”, Dr. Nwanosike stated.

The Ikwerre Council boss lashed out at Dr. Abati for being Atiku Abubakar’s political puppet and his inability of establishing any media outfit, despite he claim of being a media practitioner for over 22 years.

He averred, “A man who claims that he has been at the third tier for over 22 years, yet he cannot tell us of a media investment that he has developed whether it’s a television station of his own or a print media of his own. Rather, what he is doing is to wake up in the morning, wear a suit and tie of his age, seems he is over sixty, and come and sit down and churn out lies to Nigerians because his paymaster, Atiku Abubakar, wants to press Nigerians into giving him an opportunity to manage the Nigerian economy because he believes, Atiku Abubakar believes, that being the President of Nigeria is his life ambition”.

Dr. Nwanosike noted that what the Rivers State Governor said that a leader like Atiku Abubakar, the former Vice President of Nigeria, lied to the Nigerian public about him is factual, saying that one Dr Osina justified Gov Wike’s assertion when he called Alhaji Atiku Abubakar a liar during Dr. Reuben Abati’s Morning Show.

“Ezenwo Nyesom Wike has done well as a Chairman of Obio/Akpor Local Government, two-time Chairman, built wonderful infrastructures for Obio/Akpor people and made Obio/Akpor people to understand what dividends of democracy is and touched all their wards as a sitting local government chairman.

See also  If I become president, any govt official that spends dollars will be jailed - Peter Obi

“He grew to the level of becoming President of Commonwealth Association of Local Government Chairmen. Outside that, Ezenwo Nyesom Wike served in the same adminstration with Reuben Abati as a Minister. He didn’t shopped for it”, the Chairman of Ikwerre LGA noted.

He urged Nigerians to disregard the outburst of Dr. Reuben Abati because he does not understand the discussion that happened between Ezenwo Nyesom Wike and his team, while advising Dr. Abati to properly advise his boss.

While digressing, Dr. Nwanosike advised the National Chairman of PDP, Senator Iyorcha Ayu, to abide by the party’s Constitution and honourably resign since the presidential candidate of the party is from the same North with him.