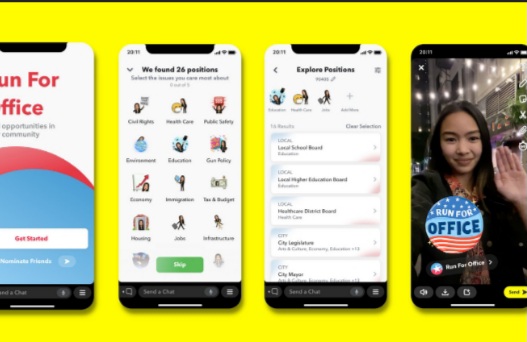 Snapchat is launching a new tool aimed at guiding its young user base to consider running for political office. The company says it wants to help potential future candidates deal with common barriers to launching political campaigns by providing information, resources, and encouragement.

The Run for Office Mini — a set of miniature applications that run within Snapchat — will let Snapchat users explore issues they care about and find information about political offices in their ZIP code. They’ll be able to connect to candidate recruitment organizations, including Run for Something, New Politics, Run GenZ, and the LGBTQ Victory Institute, which can provide training and resources to prepare for a campaign.

The tool has a portal based on BallotReady’s API that lets Snapchat users find issues important to them and includes information about 75,000 upcoming elections on the federal, state, and local levels.

Once the user picks the issues they’re most interested in, the app will surface potential roles that might be a fit.

The tool also includes a campaign dashboard to show Snap users what steps they need to take to get on a ballot, including any filing deadlines or signature requirements.

And, they’ll be able to share stickers from the portal to “campaign” within the app and share their candidacy with friends in Snapchat

Users will also be able to “nominate” friends who they see as future leaders and encourage them to run.

This isn’t Snapchat’s first foray into get-out-the-vote efforts; in 2018, it added voter registration within its app, and in 2020, the company introduced more in-app features, including a voter guide and voting checklist.

The company said it helped more than 1.2 million of its users register to vote in 2020, and half of those were first-time voters. It estimates that the in-app voter education tools were used by more than 30 million Snapchat users. The company claims to reach 90 percent of 13- to 24-year-olds in the US, and much of that demographic either has yet to vote or was eligible to vote for the first time in the 2020 election.

The Run for Office Tool builds on the work Snap has already done, partnering with the Center for Information & Research on Civic Learning and Engagement (CIRCLE) at Tufts University’s Tisch College. According to CIRCLE’s research, this younger, diverse generation wants to lead political change.

“We hope launching the ‘Run for Office’ mini changes the idea of who can be in office — that no matter who you are, where you come from, that you can make a difference in your local community by running for office based on the issues they care most about,” said Sofia Gross, Snap’s head of policy partnerships and social impact.

She added that the company believes it has an important and long-term role to play in encouraging the next generation of leaders to run for office. “We want to help shape a more reflective and equitable democracy for all Americans, and that includes the Snapchat Generation — we can’t wait to see all they will do.”