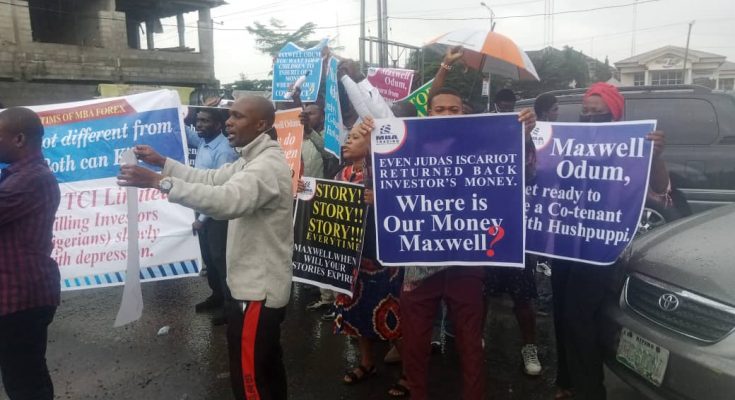 Victims of MBA forex fraud today protested in front of the Odili Road branch of Christ Embassy Church in Port Harcourt, calling on the church authorities to help the security agencies locate the hiding place of their members that have been declared wanted by the Economic and Financial Crimes Commission (EFCC) in connection with the alleged crime.

Addressing journalists at the scene of the pretest, Spokesperson of the group, Christian Agadaga said : “many of the victims are now dead, some are hospitalized and those who are alive are homeless, jobless and not sure of tomorrow as a result of this fraud meted by some members of Christ Embassy”.
“As bad as Judas was said to be, he returned the proceeds from his betrayal of Jesus. We are calling on the pastors involved in the fraud to return the monies of MBA investors to EFCC”, he added.
Agadaga stated that in the last two years the group has continued to put pressure on the EFCC to carry out their duties with regards to the MBA fraud. He said the group appreciates the efforts of the EFCC so far, especially when it took action to declare Amaechi Bartholomew Udeaku, Paul Odogo and Precious Williams wanted in an alleged case of conspiracy, obtaining by false pretense and money laundering to the tune of N15, 293,596,541.71 fifteen billion, two hundred and ninety three million, five hundred and ninety six thousand, five hundred and forty one Naira, seventy one Kobo.

Displaying colorful placards with various inscriptions that call attention to their demands, the group said they believe that the Church can help them to reach out to their members involved in the fraud, because Pastor Chris who is a gentleman will not condone such crime. 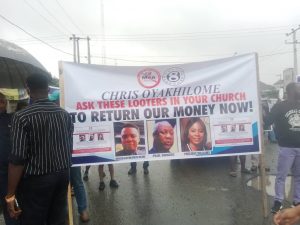 A leader of the church Deacon Sabbastin Amiakena, who spoke to the protesters, expressed displeasure with the groups decision to bring the protest to the church.
He said it was improper to disrupt church service because of the alleged crime of a few members.

Mr Maxwell Chizi Odum, the founder and chief executive of MBA Trading and Capital Investment Limited, otherwise known as MBA Forex,was in December 2021 declared wanted by the Economic and Financial Crimes Commission (EFCC) for allegations bordering on fraud to the tune of N213.0billion.

MBA is reported to have shut down since it closed on December 22, 2020, on the pretex of holidays . 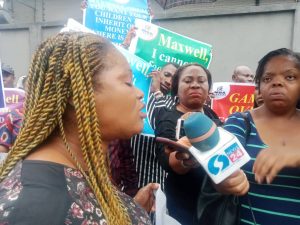 FULL TEXT OF DEMANDS RAISED BY THE PROTESTERS :

14 AUGUST, 2022
THE EFCC
MBA VICTIMS PROTEST DEMAND TO THE EFCC

1 We demand that the EFCC launch a full-scale manhunt
persons declared wanted in connection to the MBA-FO
July, 2022 and recover
Dublished in the vanguard newspapers of 15th dy cU22 and recover all assets belonging to them.
2. We demand that all bank managers, directors and members of staff who aided and and abbeted all red flags financial transactions of MBA
FOREX Which made it easy for Maxwell Odum to defraud investors should be publicly paraded and prosecuted in line with the law.

3. Hence it has taken almost two years for Maxwell Odum to be
apprehended, we demand that the EFCC shows sincerity in this fight
against corruption by decaring a REWARD to any person, group of
persons or institution across the world that will lead to the arrest and
prosecution of the fraudster.

4. We demand that the EFCC open all real estates of MaXwell Odum to- victims of MBA-FOREX FRAUD to temporarily Occupy pending when they are sold out within the shortest possible time. This has become
necessary because so many investors are now homeless, So many more
sleep under the bridges as a result of Maxwell’s calamity.

5.Because MBA-FOREX investors can no longer endure this frustration
we are giving the EFCC 21 Working days to commence the process of
refunding investors. Inability fo do this, victims of MBA- FOREY
shall consider relocating to all zonal commands of the EFCC to take refuge because we are homeless and jobless, and we shall be coming along with our sleeping mattresses, and cooking stove. 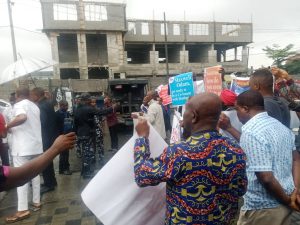