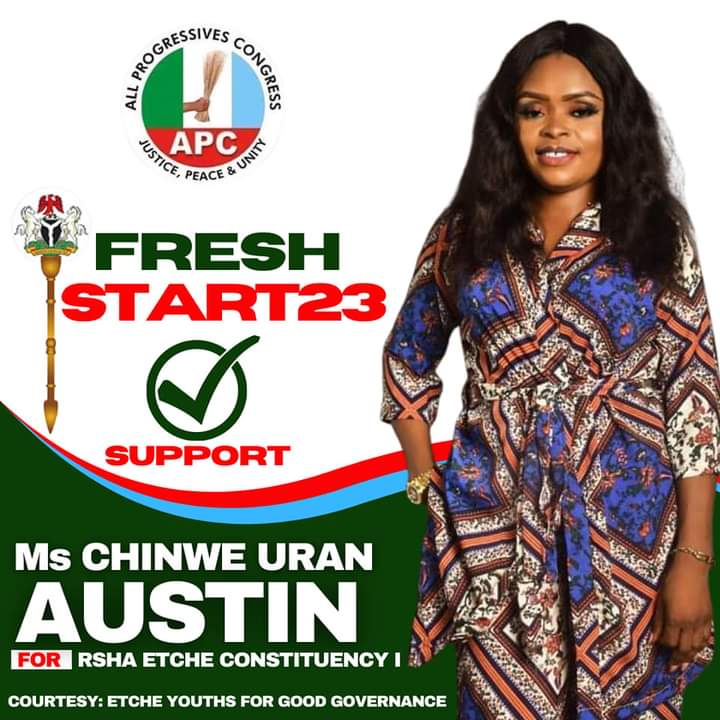 Etche Nation should be among the top 10 local governments regarding women’s political representation in governance.

Yet, it is distressing that the 4th most populous ethnic group in the state, cannot boast of 15 percent minimum representation for women who account for 50 percent of its electorate.

Earlier last year May, Ms CHINWE URAN AUSTIN in obedience to the party authority, celebrated our leader’s birthday with her NGO in some selected schools in Etche and Omuma LGAs.

“It will interest Your to know that Ms CHINWE URAN AUSTIN is a signatory to several conventions and treaties supporting and encouraging the elimination of all forms of discrimination against women and youths.

However, Ms CHINWE URAN AUSTIN have not been given a rightful opportunity. Research has it that”Women political empowerment in Etche ranks a lowly 22nd position of the 23rd LGAs in Rivers State” surveyed in the 2015 Women and Politics Gender Gap Report.

Nigeria changed to democratic rule in 1999 and five national elections have been conducted over the past 20 years.No handful of women have ever been elected to public offices in Etche local government.

A support for Chinwe Uran Austin is a support for Etche women and youths equal opportunity in politics.

Etche needs a selfless service provider, a goal getter,a people orientated personified and above all, Etche constituency 1 needs a messenger in the Rivers State House Of Assembly; that’s why all the male and female youths of Etche nation are yearning for Chinwe Uran Austin.