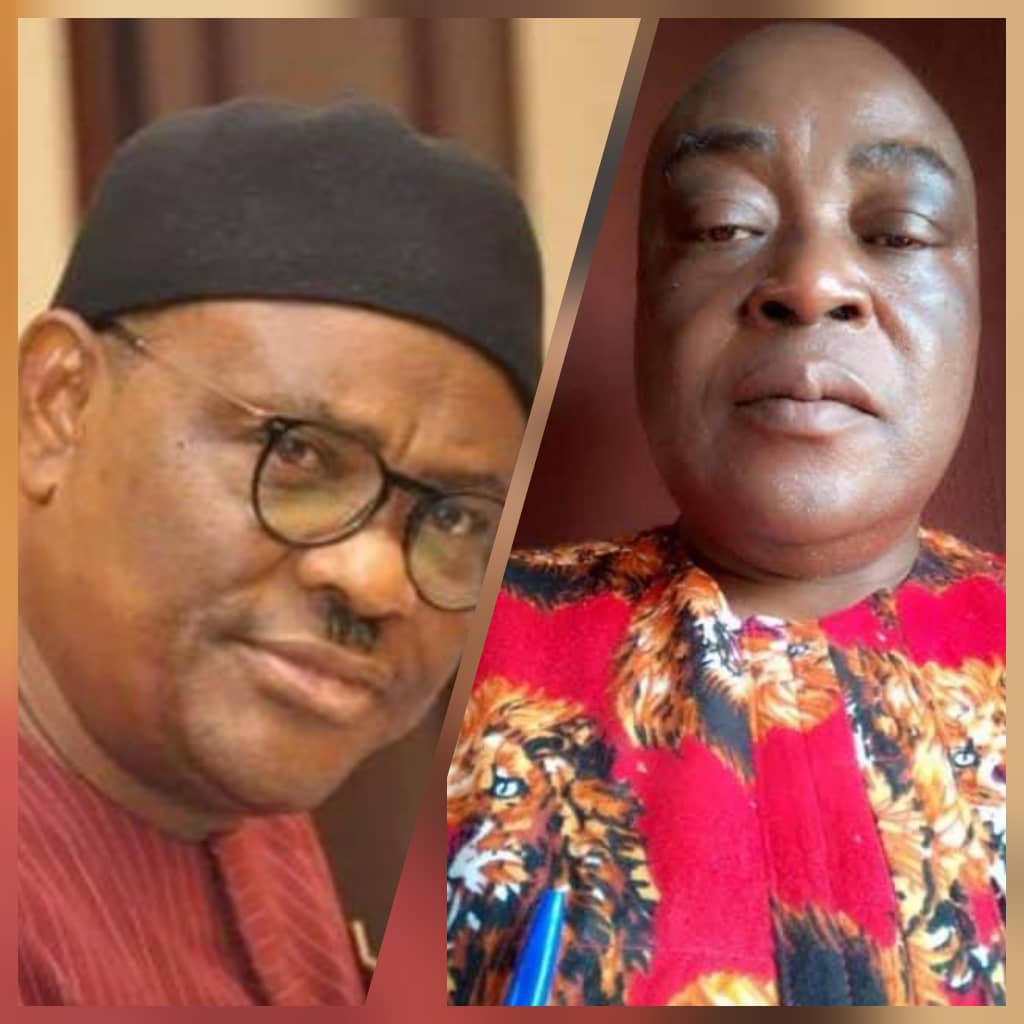 …Tasks Rivers People to Prepare to Make Demands for Refund of Looted Funds.

A Chieftain of the All Progressives Congress (APC), Chief Eze Chukwuemeka Eze, says there exists no exception in any law that restricts public access to the annual budget of any tier of government all over the world, especially in democratic climes, where the foundational principles and validity of all laws revolve around the people to whom sovereignty belongs.

According to him, no explanation will suffice to validate the rationale behind the criminal concealment of the annual budget of a state for five consecutive years because the fiscal policy of any government is top in the list of documents of interest to a lettered public in an enlightened society.

Eze quoting Dr. Jackson Omenazu a brilliant son of Rivers State who stated, “When an appropriation Bill/Act fails to explain in concrete terms the critical envelope seals of the financial pin indicators per project head, the projects as assigned in the financial Act becomes a conduit pipe. A vulcanised criminal private wallet of the conceptor of the Act” .maintained that the norm since 2015 when Gov. Wike took over power however represents a frightful departure from the usual practice of offering members of the public the opportunity to access the budget to enable them scrutinize budgetary items, audit monetary allocations, monitor compliance to terms and track progress for the general good.

It would be recalled that the serial concealment of the state budgets since the inception of the Wike/PDP government informed the decision of the World Bank to strike out Rivers State from the list of beneficiary-states in a recent $4 billion FG loan application to the global bank.

Nonetheless, Gov. Wike, in an otiose undertaking to link President Muhammadu Buhari and the APC to the exclusion accused the Nigerian Government of bias against his state.

The groundless accusation was met with expressions of incredulity by the lettered public and in a swift attempt to escape liability for the losses incurred to the state by the reckless handling of public finance, the Governor quickly ordered the upload of the 2021 budget on the state website.

Reacting to the sudden appearance of the 2021 fiscal policy of the Rivers State Government, termed -‘Budget of Recovery and Consolidation’, which falls short of the minimum standard for an annual fiscal blueprint of a state, on the state official website – https://www.riversstate.gov.ng, Chief Eze said “Public budget should ordinarily allocate resources in a strategic, transparent, accountable, fair, feasible and democratic way for timely results”, but the fiscal policy of the Rivers state for 2021 is a clear underhand tactic contrived as usual, for reformation of individual pockets.

In a statement made available to media houses in Port Harcourt, the erstwhile National Publicity Secretary of the defunct New People’s Democratic Party (nPDP), said the 2021 budget of the Rivers State government discloses very serious inconsistencies between budgetary allocations for certain projects and the actual amounts claimed to have been expended on such projects, coupled with other inexplicable oddities that put to question the human conscience in the perpetrators of the gross malfeasance.

For instance, under the top capital projects for 2021, the party chief said construction/renovation of hospitals across the 23 local government areas costs N8.5 billion, whereas, same item got a whooping N9.7 billion under the 2020 budget with no new features added to existing health infrastructure anywhere in the state.

Again, under the 2020 budget, over N15 billion was earmarked for provision of equipment and furnishing of government schools across the local government areas, and in the 2021 fiscal policy, the same item got budgetary allocation of N8.2 billion. It is shocking to learn that between 2020 and now, public schools have neither undergone any form of furnishing nor received any new equipment.

Community Secondary School, Okoro-N’Odo, in Obio Akpor Local Government Area, represents the rot and decay in public schools in the state. At CSS Okoro-N’Odo, students are subjected to the foul stench from feces in classrooms with badly perforated roofs and dusty floors on which they sit. No doors, windows, desks etc., yet, billions have been shared-out by government officials.

Another atrocious scam is the completion of 191 model primary schools across the state. That item got over N8 billion in the 2021 budget. N11.9 billion was set aside for same projects earlier in the 2020 budget. The appalling standard of education in public schools tells more of the embezzlement scandals represented in the shocking infamy that has permeated through successive fiscal policies of the state government since 2015.

Community Primary School, Amaku-Igbodo in Etche Local Government Area, is one out of the very many public primary schools where the dignity in citizenship and the worth of education are reduced to nothingness.

Nature has taken over classrooms in Community Primary School, Mba, Etche, where academic activities have been halted for four years for lack of teachers. State School, Isu, Etche, has turned into a playground for children and meadow for hey while Central Primary School, Isu, Etche and several others have been converted to places of dwelling for reptiles and biting and sucking insects, all for lack of government attention.

State School 4 and 5 in Ibaa Community, Emohua local government area, have both been consigned to history.
In fact, it will take the expertise of anthropologists to discover the sites where those two public schools were located in Ibaa, but the challenge will be the lack of ‘ancient remains’ with which to make the discovery.

If pupils and students of public schools still sit on bare floors after billions have been channeled to furnish and provide basic facilities under the budgets of 2020 and 2021, then it is safe to settle that the N4 billion provided in the 2021 fiscal policy for the provision of landscaping, sports field, basketball pitch and play pen for 200 schools across the state is mere cosmetics and grossly fallacious.

A visit round public schools across the state will not only confirm these facts, but will definitely expose more rots in the system. It also beats one’s imagination to see the state government budget over N6 billion for the ‘production of healthy food for human consumption’ when in fact, the state on its own, produces absolutely nothing. “If Rivers State government can set aside N6 billion for the “theoretical” production of food for human consumption, then Akwa-Ibom, Ebonyi, Lagos, Cross River Oyo and others that have expanded their economic capabilities through the creation of industries and are engaged in “practical” production should be budgeting trillions for same item.”

The sum of N68 million for Job Information Management System under the 2021 budget is an obvious engagement in fanfare of squander mania, when for the past six years, no job has been created. “I weep for Rivers over this huge commission of waste. A lot of questions are begging for answers’ Eze lamented.

What more can one say about the N1.1 billion set aside for scholarship program in the budget under an administration that withdrew financial grants to students captured in the state scholarship scheme during the administration of ex-Governor Amaechi.

Given a careful summation of funds generated from IGR, the Amaechi N78.9Bn refund, the Paris Refund, bailout funds, loans, monthly allocations & 13% derivatives, etc., all of which amounts to hundreds of billions, it is safe to categorically settle that there are no commensurate projects for the huge sums that were credited to the state accounts with deposit money banks.

Assuming the monies for the very many ‘cosmetic projects’ under the 2020 budget are intact, then there would not be need for any loan to fund projects in the 2021 fiscal framework. The big question: Where is the balance left from 2020 budget? A demand for the leftover from the budget of 2021 is very, very necessary.

Further, while Ikoku and Rumuokoro overhead bridges cost N1.5 and N1.2 billion respectively in the 2021 budget, over N25 billion has been expended on the two flyover bridges. The situation in Rivers State is a clear case of ‘much ado about nothing’. “No creativity, no innovative idea, no plans for investment, no commensurate results for the multi-billion naira annual budgets since 2015, yet people seem cowed into the broad day heist of the common patrimony by an unrefined toothless bulldog.”

Chief Eze called on the good people of Rivers State to come together and prepare to ask for refund of monies swindled through non- existent projects and over-blotted annual budgets, running into billions.

He said not less than 40% of the annual budget of Rivers State is plundered by Gov. Wike each year and it is a frightening reality.

Describing Gov. Wike’s fiscal framework for 2021 as mere theatrical costume laced with irreconcilable errors and bizarre inconsistencies, Eze emphasized the need for the budgets of 2016 to 2020 to be made public to allow citizens of the state the opportunity to carefully scrutinize them, differentiate between real and imaginary projects and weigh the actual costs of executed projects in order to sum the total amount to which the Governor is indebted to the state, to enable the people begin to make arrangements to make demands for refund upon the expiration of his term in 2023 and before the Economic and Financial Crimes Commission (EFCC) is formally invited.

“Those who love the Governor would endorse the idea of publishing the budgets of Rivers State Government since 2016 including the supplementary budget of 2015 so that people can carefully look through the pages of the work and help the Governor sum the total refund he would be making to the state at the end of his administration in 2023” Eze said.