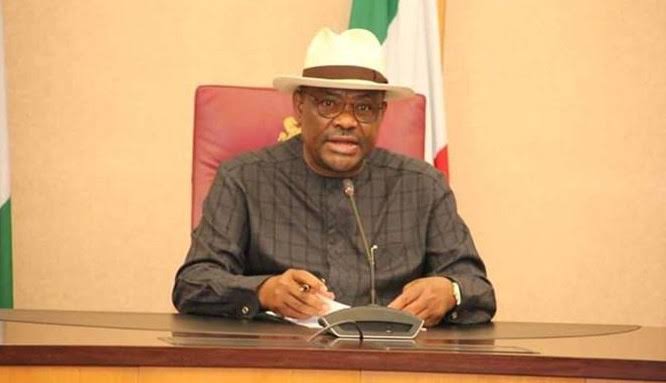 Rivers State Governor, Ezebunwo Nyesom Wike yesterday 28 day of September 2021, said that the Niger Delta Development Commission, NDDC, is now a cash cow for politicians in the country, threatens to shut down eastern bypass if they fail to pay its counterpart founding

This came as President Mohammadu Buhari commissioned the NDDC office and residential complex for the Special Protection Unit, SPU, of the Nigeria Police Force, in Omagwa, Ikwerre LGA of the state, 10 years after it was abandoned.

The building consist of an administrative block, an armoury, gate house, underground cell, and 66 units of accommodation made up of the commander’s residence, second-in-command’s residence, and 64 one-bedroom flats.

“These are people who will make sure money is available for politics. You have portfolio contractors from Abuja. Every now and then, the Managing Director will be running to Abuja.”

According to Wike, the problem of the NDDC was not just the Niger Delta region but entire Nigeria.

Making reference to the promise by the Minister of Niger Delta Affairs, Godswill Akpabio that the NDDC would change to meet the aspirations of the people of the region, Wike said it is time for the commission to work.

“The road you want to do is not your road. You won’t liaise with the state to say ‘look what project do you want in this state?

“If you ask all the nine states in the Niger Delta and say State A, what kind of project do you want NDDC to execute? We are not interested in who will be the contractor. Our interest is that we are synergising with you so that you don’t repeat those things we are doing.”

Sole Administrator, NDDC, Effiong Akwa while speaking, said on the occasion that, “Project was abandoned for 1o years as all six contractors were being owed for various milestones completed.”

He said the commission under his headship, with the push from the President, was able to complete it against all odds, particularly with the paucity of funds, aggravated by the reluctance of oil firms to remit funding to the commission in defiance of the NDDC Act.

President Buhari, represented by Vice President Yemi Osibanjo noted, “Today’s event meets two objectives, first, it is an important part of our government’s commitment to improving the lives and livelihoods of police officers and men. It is also another milestone in my administration’s pursuit of the peace prosperity and development of the Niger Delta.”

“Establishing adequate security is integral to this objective, which is why we have committed significant resources to project such as we are about to commission.

“This project is a means by which we can alleviate the accommodations challenges for senior security personnel posted to Rivers and ultimately enhance the security footprint in the region.

“The cumulative impact of this and similar projects would be the improvement of security in the stae and consolidation of the economic and social life of the people of this area.”

If Nddc fail to pay, I will shut down eastern bypass – Gov. Wike