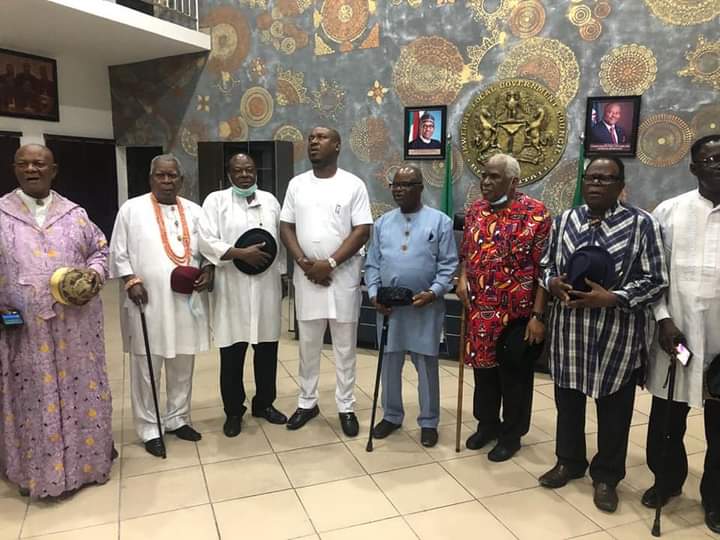 ……Describes Him As Colossus In Championing Ikwerre Cause

He said, “In all your political adventure you have stood as a colossus at your own level, championing the cause of an Ikwerre man, speaking without favour, clearly articulating the views of Ikwerre people where it matters”.

Prof Wami said he and his team were in Ikwerre Council Secretariat to congratulate Hon Nwanosike on his re-election as the Chairman of the ancient Local Government Area and to thank him for his solid support towards Ogbakor Ikwerre Cultural Organisation Worldwide.

He expressed joy that Hon Nwanosike had transformed the ancient Ikwerre Local Government Council which Etche and Omuma Local Government Areas were formally part of. Adding that he had set a pace for those coming behind him to emulate.

Prof Wami stated that Ogbakor Ikwerre Cultural Organisation is apolitical, but would support Hon Nwanosike at all times for championing and defending Ikwerre cause.

On his part, Eze G. A. O. Omodu, Ochi Oha VIII Ikwerre, expressed happiness that Hon Nwanosike is a true Iwhuruoha man. Urging other young ones to be committed to Ikwerre cause and never allow the legacies of their fathers to die.

Eze Omodu joined the Ikwerre Council Chairman on the call for Gov Wike to stand for Nigeria’s Presidency, saying that an Ikwerre man is capable of ruling the country.

Earlier speaking, the Chairman of Ikwerre LGA, commended Ogbakor Ikwerre Cultural Organisation Worldwide for grooming young leaders and ensuring that Ikwerre would not be found wanting in the annals of leadership.

According to him, “All of you joined in molding us. I tell my brothers that our leaders are very careful in making sure they don’t allow for vacuum of leadership. As they are climbing the ladder, they are making sure they are teaching us the roads so that when their bones get weak, Ikwerre would not be found wanting in the annals of leadership because as long as man will exist on this earth leadership would continue to exist”.

Hon Nwanosike specifically thanked the President General of Ogbakor Ikwerre Cultural Organisation Worldwide and his members for molding him and other young Ikwerre sons and daughters, while recalling his university days and his relationship with Prof Wami.

He noted that his administration immortalised Late Chief Jackson Mpi who built the old Ikwerre Council Secretariat by naming the premises after him and also immortalised other past Council Chairmen by hanging their pictures on the Council Chamber in order for people to recollect their good efforts in building Ikwerre LGA. Justifying that the brand new edifice built by his administration for the civil servants was named after Sir Dr Peter Odili due to the good he deed for Ikwerre people.

Hon Nwanosike recalled that his administration started the rebuilding of Ikwerre Local Government Council Secretariat on 24th November, 2019. Saying that by prayers and the grace of God, COVID-19 and meager resources could not stop the rebuilding.

“For me, I see this as an opportunity to support the development of my people. I am not the best. My team and I, we are not the best. There are a lot of young intelligent Ikwerre boys and girls, but the lots have fallen on us now. If it is connection, probably we won’t have been here because we are children of humble background”, Hon Nwanosike said.

He used the opportunity to beckon on Rivers State Governor, Barr Nyesom Wike, to contest as Nigeria’s President. Urging Ogbakor Ikwerre Cultural Organisation to rally round him when he finally accept the call.

High point of the visitation was the touring of some of the projects executed by the administration of Hon Nwanosike.