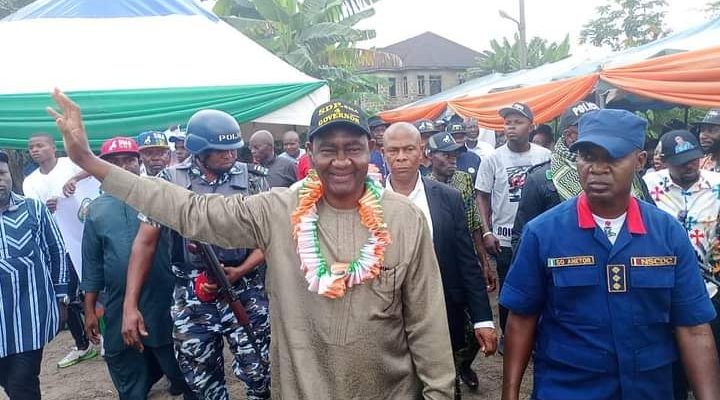 We Will Contest And Win The Election Without Shedding The Blood Of Any Person — Abe.

Nobody can stop an idea whose time has come. I want to say this, I have said to people, when they carry guns and they pursue you don’t respond to guns, we are going to contest this election, we will not shed the blood of any Rivers person.

The boy that was shooting at us in Oyigbo, that went to go and destroy our banners in that community, we have his photograph when I was presenting him with a computer, a laptop, I have told them to release the photograph.

If I was buying guns for people a lot of people will have guns but I bought him a laptop and he chose to follow those that will give him a gun to pursue the man who gave him a laptop. Is that the kind of future that Rivers people want?

Is there anywhere they will put slavery, suffering, hunger on one side and then put progress, prosperity and enjoyment on another side and people will use their own hand to choose slavery, suffering and poverty? Will you do that? Will Rivers people do that? We will win this election!

I hear that they have set up a taskforce to be tearing our posters, taskforce on poster destruction is now a means of empowerment. But when you tear the posters that are on the road and are on the walls, can you break into people’s minds and tear us out of their mind? We will win the election!

I have told Rivers people that this thing that we are doing is a contest of ideas, we have ideas that will make your lives better. You have been doing the same thing over and over and over and you are not satisfied, you are not happy, if we are living in a society where the people were to he happy, the chairman did not need to come and beat up a fellow Nigerian citizen in his own village who has committed no crime for the fact that he does not agree with the chairman and his party. Is that a criminal offence in the Federal Republic of Nigeria?

Even if it is a criminal offence does the chairman become a court of law to try, convict, sentence and execute a citizen of the Federal Republic of Nigeria? Is it right for one man who has a wife and children at home to walk up to another responsible man who has his own wife and children at home and begin to slap him surrounded by police simply because you are a chairman of council?

I have been Minority Leader of Rivers State House of Assembly, I have been Rivers State Commissioner for Information, I have been Secretary to the Government of Rivers State, I have been a two term Senator of the Federal Republic of Nigeria, I have never slapped any citizen of this country for any reason whatsoever no matter the provocation, but today, just because I say I want to come to Degema to share my own message in our democracy with the people of Degema, a lawyer, a proud son of the Degema people, a shining example of what commitment and determination to uplift your people should mean was beaten up in his own community so that the people will not see, so that they will not hear, so that they will not feel Senator Abe. Is that a rational way to live? We will win the election!

If a lot of these people were properly trained and properly educated, their response and behavior in all these situations will be very different.

I was telling people today, people are getting ready, buying guns to assault other politicians who want to come and campaign but when I was in their own position, the Governor then gave a directive that Wike who was in GDI should not be allowed to campaign in Rivers State.

Other people obeyed that directive but when Wike wanted to come to Gokana, I was in Abuja, I heard that they were meeting to buy guns to go and chase Wike from Gokana, I took a flight and flew down to Port Harcourt and I went to that meeting and I told them it would not happen in Gokana, because if I allow you people to carry guns and go and chase Wike in Gokana and anything happens to him, I know his wife, I know his children, you all know his wife and you know his children, how would we face them?

And how will I be able to live in Rumueme? I live in his village and he cannot go to my village to campaign? I said if you people do it, I will go on air and I will announce that I’m no longer the leader of this party in Gokana, I will not allow it. And I called then minister Wike and I told him, I said you can go to Gokana and campaign peacefully, nobody will harass you, he is alive, he knows the story, we met at Le’meridien in GRA and I said, in Gokana nobody will harass you, you will go and campaign but you will not win, that’s what I told him.

And he went to Gokana, the money they were to use to buy guns and hire boys, I told them to distribute the money to all the different wards of Gokana let them buy rice and buy goat and eat in their wards, that is a better way to use our money than to use it to buy guns.

Nobody can intimidate us, nobody can stop us from carrying our message to the people of Rivers State.

We are not against anybody, we are not fighting with anybody. Open the road let them hear the message. An election is a contest of ideas, it is not a contest of war.

I have said to people and I want to repeat it here, our Lord Jesus Christ himself said that the law was made for man and not man for the law. These political parties were made for you, to serve your convenience.

If these political parties have become object of enslavement to your life , have become a vehicle of poverty to your future, have become a tool to disenfranchise, to scatter the dreams and visions of your children, it is time for us to try something different.

No matter what they say, no matter what they do, the message we are bringing will resonate around every creek, around every homestead and into every heart, and when it comes to that 12th of March 2023, when Rivers people will decide their future, we have no doubt that between slavery, poverty and exclusion and progress, peace, prosperity and inclusion, every Rivers man and woman will choose freedom over slavery, we will be free, the future is bright.

Nobody, nobody will stop us from exercising our democratic rights in Rivers State, it not possible.

I have told people that Rivers people have never been slaves, nobody has succeeded in enslaving this land, and nobody will succeed today, whatever you see today, it is very very temporary.

I have said before, I want to repeat it here, Wike is the outgoing governor of Rivers State. Sen Abe is incoming governor of Rivers State. So there is no need for us to fight, outgoing and incoming, we can work together because it is the people that will decide who will come in and who will go out. The constitution has set a term limit. 29th of May, that will be the day the new governor will be sworn-in. Read Full Article