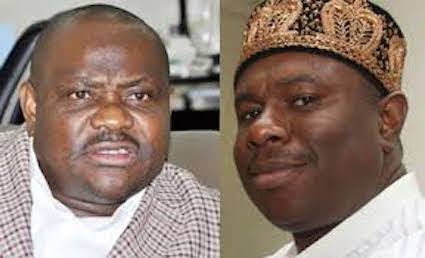 Reading through a disjointed piece written by one Ibim Amieyeofori, a roustabout working with Rivers Commissioner for Information, one would readily understand why the state government information machinery lacks fitness, tact, guile and grace.

The watery attempt at having something tangible to say in response to words of wisdom from a concerned Rivers son typifies the lack of direction from their paymaster.

As he has been doing since 2015, a seasoned technocrat and turn around expert, Dr Dakuku Peterside in an interview admonished Governor Nyesom Wike over the rash way and manner he has been administering the state under his watch.

In the interview, Dr Peterside pointed out clearly what was not going well and even offered suggestions on the way forward for a state that is so rich but lagging behind in fundamental areas.

Not Even Governor Nyesom Wike has been able to respond, albeit with facts and figures, to the genuine concerns of Dr Dakuku Peterside on the state of affairs in Rivers.

With N3 trillion received in the six years, he said there was nothing on ground to justify such earnings by the Wike-led government, especially with primary and secondary education having virtually collapsed under Wike’s term. As for bursary to students in higher institutions, it looked like it never happened in Rivers history.

Unfortunately for Mr Amieyeofori, Wike has never bordered himself about having to fashion out a blueprint for the development of the state, hence the penchant for the governor to award contract from his breast pocket.

Since the author lacks the comprehension to decipher issues that border on governance, he would have known that Dakuku, in conscious effort to contribute to the growth and development of the state has publicly offered suggestions to the government on how to make life meaningful for the people.

In Rivers State Newspaper Corporation, publishers of The Tide newspaper, where the author last worked before he retired, no single employment has taken place in the last six years. Even worse, the newspaper is struggling to publish and was at a time, shut down for six months.

In the education sector, Wike’s administration has achieved less than 5% using key parameters of measuring progress in education . In many schools today, there is absence of teachers in core subjects like Mathematics, English, Biology, Chemistry, Physics, Agriculture Science, Economics, among others. Teachers are not motivated , no teaching aid and no new infrastructural development.

Across virtually all local government areas, many primary schools have been shut down owing to lack of teachers, classroom blocks and teaching aids. Children who should be in primary schools are now at home, abandoned to their fate by a careless governor. The ones who were on scholarship overseas were withdrawn .

In Buguma, where Ibim Amieyeofori comes from, there is no functional primary healthcare hospital, neither are the public primary and secondary schools having full completement of teachers.

The Buguma Fish Farm, initiated, started and completed by the Amaechi’s administration to create employment and, generate trade and commerce for the people of Kalabari land has been abandoned.

Rivers today is among the states in Nigeria with the highest unemployment rates largely due to an administration that lacks the creativity, policy direction and managerial acumen to engage Rivers youth.

All the feeble attempts by the Wike administration to create any form of decent employment have been shrouded in secrecy or an outright scam, a fact even acknowledged by the Information Commissioner, Paulinus Nsirim, who stated that applications were still been sorted out almost two years after Rivers youth were hoodwinked into applying for non-existing jobs.

Under former Governor Chibuike Amaechi administration, it took less than three months for over 13,000 people to be employed in a single day.

Rivers people are unanimous in their verdict of Governor Nyesom Wike’s administration so far. The balance sheet is entirely in deficit, which is not surprising to those who know him as lacking coherent vision.

We sympathise with the author who was invited to come and eat but it is obvious that he is not learning table manners or that he has not been given sufficient food to warrant his crying against a patriot like Dr Dakuku Peterside, who has consistently placed Rivers state above personal interest.